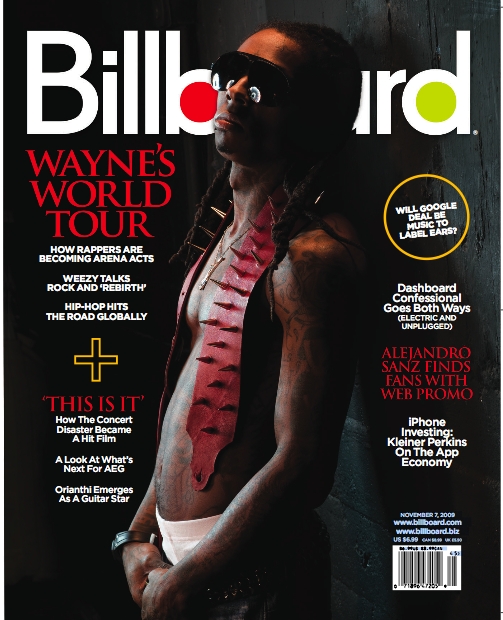 A short interview talking about Rebirth to go along with it:

Given earlier leaks from the project, did you make many changes to the final version?

As of now Rebirth is coming out as a double disc with a [disc of songs] by Young Money. I had to add new cuts because a lot of things leaked, making people think they had an idea of what I was doing with Rebirth and what it would sound like. And I hated that because I never want anybody to think they know what I¹m doing until I present it. So what I did was make it totally different I flipped it.

Does the album still lean toward rock?

Yes, the album is still rock. I play guitar on 80% of the songs and there’s a lot of rock influences and rock beats. I also have Travis Barker on the album. But I don’t want people to think I’m trying to do something I can’t do. Don’t think you’re going to put on the album and hear me screaming and singing . . . Don’t worry about that [laughs]. When people hear me say rock, they may get a little scared like, Oh, God. What is he going to do? When I said I was doing a rock album, it was about doing a freedom thing. This album isn’t hip-hop. When I do my Carter albums, I know I’ve got to rap, I know I’ve got to spit. I know the words I’ve got to say and the subjects I’ve got to talk about. I also know the things I shouldn’t say, the things I shouldn’t talk about. There’s none of those limits on this album. I say what I want, how I want. That’s what this album is: a freedom album. And rock is the avenue that gives you that freedom. I’m just having fun, that’s all. Trust me: People will like these songs. It’s my job to make them love them, but I know for a fact they’ll like them.