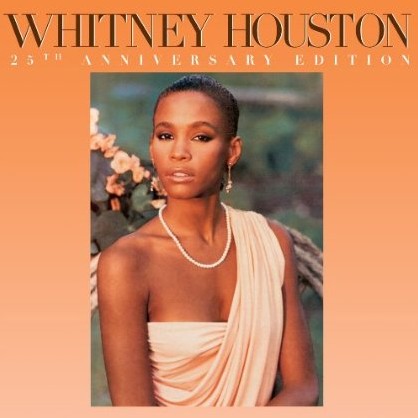 25 years ago, she hit the scene with her blazing self-titled debut album that has till date managed to sell over 25 million copies, also getting a mention in the Rollinstone 500 Greatest Albums Of All Time list.

On January 19th, 2010, fans can pick up the 25th Anniversary Special Edition of the album which will be fully re-mastered with bonus remixes and DVD.

Have a look at the press release and track list after the jump.

The Whitney Houston – 25th Anniversary Edition CD/DVD package includes the international chart-topping original Arista album remastered in its entirety for the 25th anniversary along with five bonus tracks including Whitney’s a cappella recording of “How Will I Know” plus a stunning live performance of “Greatest Love of All.”

Originally released on Valentine’s Day 1985, Whitney Houston entered The Billboard 200 at #166 the week of March 30. A year later, in April 1986, the album began its first seven week run at #1, then spending three weeks at #2 before reclaiming the top slot for a jaw-dropping second seven week stand. Whitney Houston became a fixture on The Billboard 200 for 162 weeks, including a record-breaking 46 weeks in the Top 10 and 14 non-consecutive weeks at #1.

The strength, beauty and power of the record’s music including four chart-topping singles (“You Give Good Love,” “Saving All My Love For You,” “How Will I Know,” “Greatest Love of All”) have made Whitney Houston one of the best-loved and most enduring albums in pop music history. The planet’s top-selling debut album ever released by a solo artist, Whitney Houston has sold more than 25 million copies worldwide while earning RIAA-certified 13x Platinum status in the US (in recognition of domestic sales of more than 13 million pieces).

With Whitney Houston earning the artist a Best Album Grammy nomination in 1986, Whitney Houston took home her first Grammy that year in the Best Pop Vocal, Female category for “Saving All My Love For You.” Her performance on the Grammys won her an Emmy for Outstanding Individual Performance in a Variety of Music Program. Whitney, who currently holds the record for most American Music Awards held by a solo artist (21), picked up her first seven AMAs, and an MTV Video Award, that same year.

“I cannot believe it has been 25 years since my first album!,” writes Whitney Houston in her exclusive letter to fans appearing in the packaging for the 25th anniversary release of her debut. “I could never have done this without the support, encouragement and unconditional love from my fans all over the world. I love you all!”

Since the release of her 1985 self-titled debut album, Whitney Houston has built and sustained an illustrious career, generating combined worldwide sales of more than 170 million albums, singles and videos. Cited by the Guinness Book of World Records as music’s “most awarded female artist of all time,” with an unsurpassed tally of 411 awards including 6 Grammy Awards, 2 Emmy Awards, 23 American Music Awards and 16 Billboard Music Awards Whitney Houston remains a singular force in music today.

In August of 2009, Houston’s seventh studio album, the critically-acclaimed I Look To You debuted No. 1 in USA, Canada, Germany, Italy, Holland and Switzerland, marking the biggest first week’s sales of her career in both the USA and the UK.