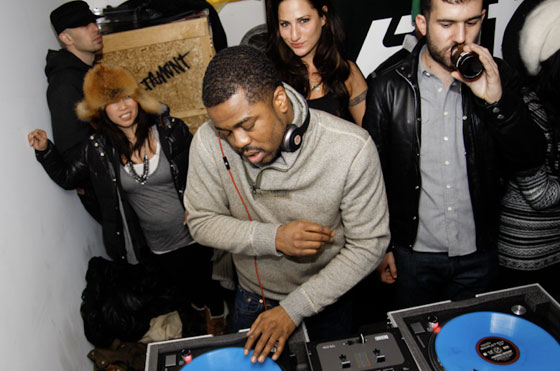 A couple of weeks ago we wondered, “WHERE IS JUST BLAZE,” as he is one of the greatest hip-hop producers of all time and whatnot. Perhaps exactly at that moment, in a stroke of galactic synergy, he was DJing at the Fools Gold/LTD Mag holiday party playing an assortment of his own productions (AKA nearly every rap song that was amazing in the first part of the ’00s) before launching into one of the SICKEST house sets we’ve heard in a hot minute. Even if you don’t like house or hip-hop (WHO ARE YOU?!?), it’s worth listening to for his shout-outs on the mic, i.e. “Shout out to everybody in line for the bathroom, that shit is hella long,” or when he cuts out “Flipside” on Peedi Crack’s intro ad-lib and the entire crowd tries to speak Spanish but just sounds like “Que tu aklajdsfljalkdfjsdalkfjdlsjf SHE SAYS SHE BLOW LA LA!”