Lil Wayne To Retire After Tha Carter V; Reveals Details On ‘I Am Not A Human Being II’ 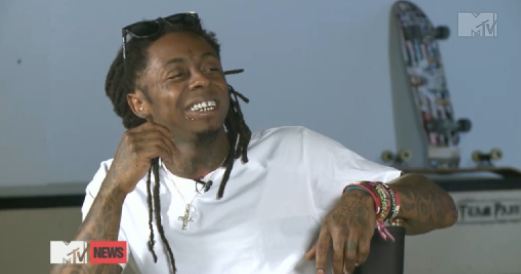 After debuting the video for ‘No Worries‘ featuring Detail, Lil Wayne sat down with Sway for a 30 minute interview where he revealed a lot of details on his next album I Am Not A Human Being II.

Weezy revealed some collaborations and producers on the album and said that Kanye will not be making an appearance but rather designing the album packaging. Also, some of the songs on the project will be leftovers from his previous albums — Tha Carter III and Tha Carter IV.

Continuing the talk, the Young Money boss revealed that his next single is not known at this point but he’s shooting a video for ‘Rich As Fuck (R.A.F.)’ featuring 2 Chainz. He will also be going on a world tour in 2013.

There has been talk about retirement earlier but Weezy stays firm and declares that he will be retiring after Tha Carter V, which will be the next release following I Am Not A Human Being II. Watch the full interview below with breakdowns.

Lil Wayne says his I Am Not A Human Being II album will be nothing like the “No Worries” song. He also mentions that some of the songs on the project will be leftovers from his previous albums – Tha Carter III and Tha Carter IV.

Lil Wayne names the producers on his I Am Not A Human Being II album and says it is like a Tha Carter V album. He also says his very last album before he retires is going to be Tha Carter V.

Lil Wayne says he has a sports show coming out with Nelly.

Lil Wayne names some of the songs and features that will be on I Am Not A Human Being II, as well as as the lyrics on a hook he did. The Juicy J-produced tracks are called “Itchy”, “Walk”, and “Trippy Kid”. The Diplo-produced track is called “Lay It Down” and Wayne hopes to get Nicki Minaj on it. There is a track on the album called “Shit On Things” and “Bitches Love Me” featuring Future and a hook from Drake. Weezy also explained how he is really excited for the project to come out and says Kanye West did not produce any music on it, but he will be doing the album packaging.

Lil Wayne does not know which single off I Am Not A Human Being II he will be releasing next, but he will definitely be shooting a music video for a song called “Rich As Fuck (R.A.F.)” featuring 2 Chainz. He also confirmed that 2 Chainz will be on the album twice and talks on his relationship with him before music. Weezy said he would love to work with R. Kelly and Mary J. Blige in the future (even though he has already worked with them on records before).

Lil Wayne talks about his unique style, getting criticized for it, making the styrophone cup cool, and more.

Lil Wayne talks about skateboarding and his TRUKFIT clothing line.

Lil Wayne speaks on the success of his Young Money artists.

Lil Wayne speaks on his retirement and says he is “very serious” about it. He also says in 4 years he will be a sports analyst and a skater – work in sports during the day and skate all night instead of being in the studio. Weezy also speaks on a skater crew who have started a campaign called “Fuck Weezy”.

Lil Wayne talks more on skateboarding and how he finds their world different.

Lil Wayne confirms the new release date for I Am Not A Human Being II is February 19th, says he will be going on a worldwide tour all next year, his Young Money artists, how his kids are doing, and if he see’s himself ever settling down and getting married.