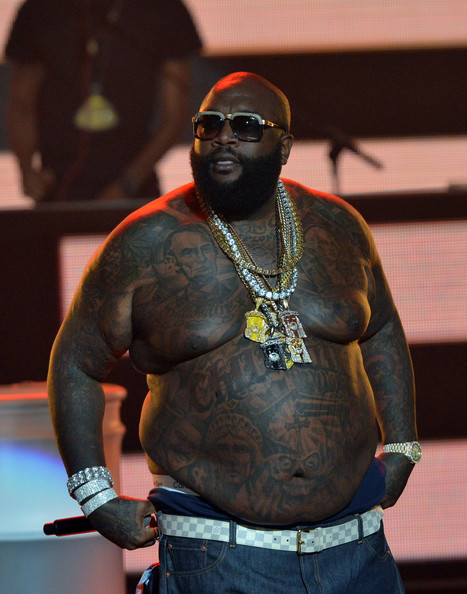 Wednesday marked a high for Rick Ross as his album God Forgives I Don’t was nominated for Best Rap Album at the 55th Grammy Awards. But Ross may not be celebrating too much as today. He has canceled his tour stops in Charlotte and Greensboro, North Carolina, scheduled for this weekend, reportedly due to gang threats. The tickets for the concert which was also supposed to star Wale and Meek Mill can be refunded starting Friday, Live Nation has announced although no official reason has been provided.

The threat comes from street gang Gangster Disciples who are unhappy with Rick Ross using their six-point star sign on the artwork of his Black Bar Mitzvah mixtape released in October as well as him shouting out their leader Larry Hoover on his street hit ‘B.M.F.’ Angered by the disrespect to them, the North Carolina chapter of Gangster Disciples warned Ross about coming to Charlotte and Greensboro in a video released last month. Before the concert was canceled, Charlotte-Mecklenburg Police had released a statement saying officers would remain vigilant to ensure safety at the event.

UPDATE: Rick Ross has canceled rest of the MMG tour and issued a statement.

Representatives for Ross have told AHH that rest of the tour has been canceled due to “apparent lack of organization and communication on the part of the tour promoter”.

“I want to apologize to all of my fans who I missed performing for due to the cancellations and want to let them know that I will get back to their cities. I enjoyed my experience with my little bros Wale and Meek Mill and I’m ready to get back in the studio to make good music.”