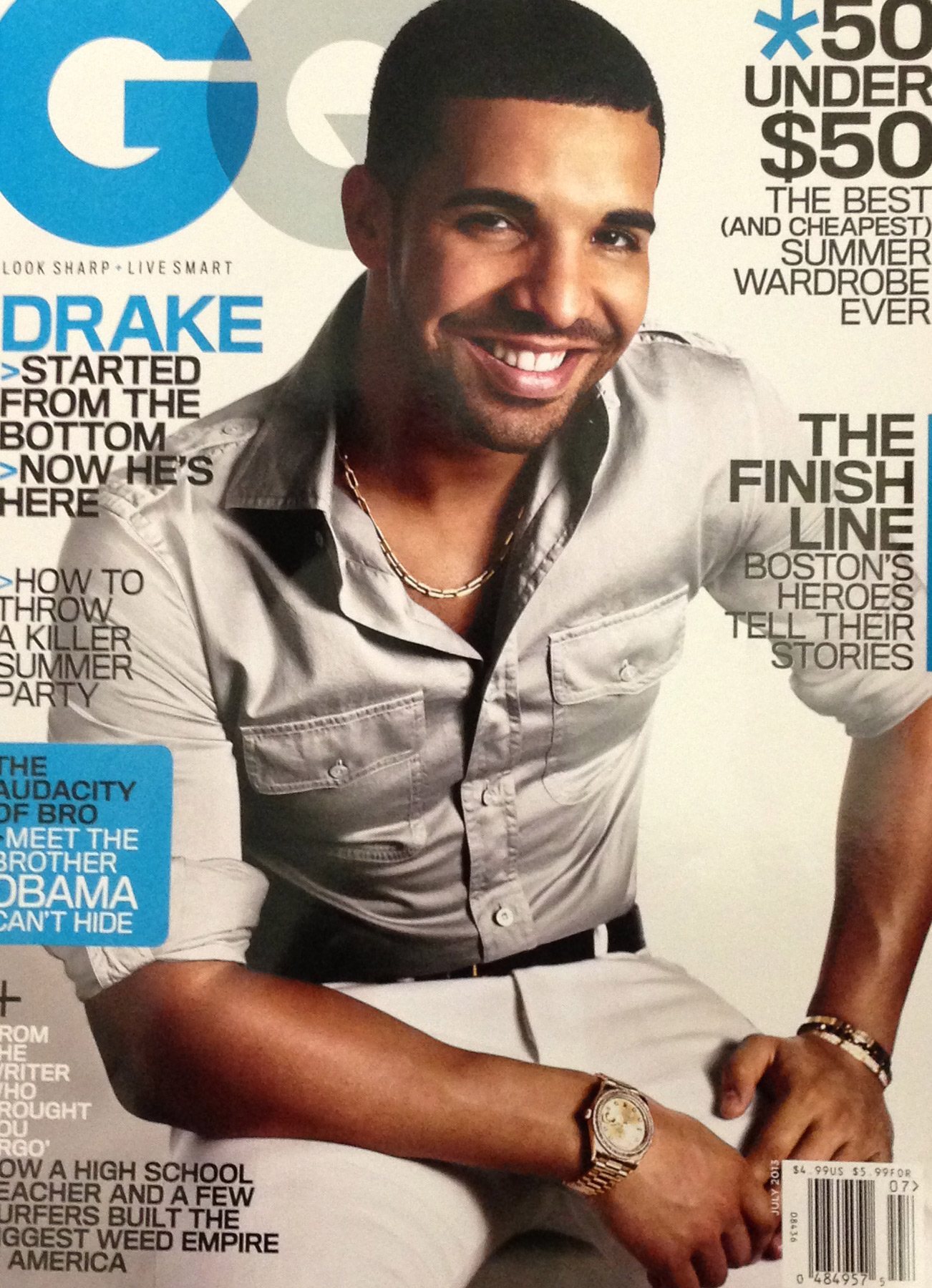 Drake covers the July issue of Gentlemen’s Quarterly magazine with the headline line Drake: Started From The Bottom Now He’s Here. In the cover story, he talks about the Chris Drama, his thoughts on love, his upcoming album Nothing Was The Same and more. In the interview, he also reveals sampling Whitney Houston on one of the song from his much awaited third album which is expected to be released later this Summer. Below are a few excerpts.

On other rappers hating on him:
“You notice they don’t criticize the music itself, though…I’m okay with that.”

On being abstinent, sort of:
“You know the way fighters don’t fuck before the fight? Sometimes I feel like I’m so focused on training my body and getting my mind right to create this album that sex isn’t one of my main priorities. If someone is around that I know and trust, I’m down. But I’m not going to end up with some stranger at this party.”

On Chris Brown drama:
“I hear he has everything he could want now. I don’t want my name to be synonymous with that guy’s name. I really don’t. I wish we could sit down just like you and me are right now, and talk it out man-to-man. But that’s not going to happen. I’m not confrontational, but if someone challenges, I’m not going to back down. If I think about it too much, I feel it wrapping around my foot, like I get a feeling it could end really badly…Like, it gets really dark.”

On love:
“[Will Smith said] It’s not about wanting anymore, you need that person. Hearing that, I don’t know if I’ve ever felt that way…I’ve made a lot of music about love being the only thing I’m missing. I think this is the first album I’ve made saying, ‘I’m okay, I’m enjoying it right now.’ Maybe this is my time to grind it out, make a run for it, and add some memories with my boys.”

On “Started From The Bottom:”
“I think a lot of people wish their favorite rapper wrote it—as if a song like that should be gangster—but I was the one who wrote it, and everyone has their bottom.”

“As for my whole story, I wouldn’t change a thing. I’ve told bits and pieces of it—and I’ll tell more. Maybe because I had friends who grew up in the hood, I could have acted like I had, too, and perpetrated a different lifestyle, and it would be eating away at me because it wouldn’t be the truth. i’m actually here in front of you living the truth. I wake up int he morning and my heart is light, man. It’s not heavy. I don’t have skeletons in the closet on their way out. This is my real age, my real name, my real past, and I’m good with that.”

On Nothing Was The Same:
“This is my fucking moment to say if I wanted to rap all the time, really rap, I would, but I also love to make music. I’ll do this for you right now. But it’s for me, too. It’s my story…I’m trying to get back to that kid in the basement. To say what he has to say. And I’m trying to make it last.”

And if you’re curious to when Nothing Was The Same is dropping, Drake says “I ain’t gonna lie: I want to be the one you listen to all summer.”