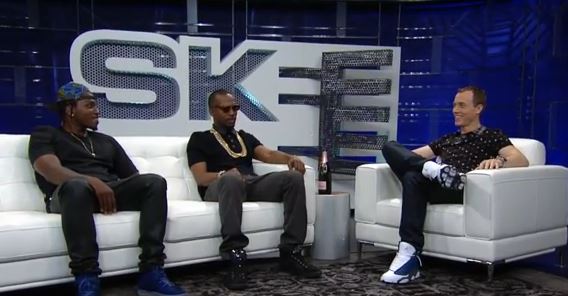 Pusha T is in a promo mode to push his debut album My Name Is My Name, hitting stores on October, if it doesn’t suffer another push back that is.

In an interview with HHDX, Pusha reveals that he’s got Kendrick Lamar on a song called ‘Nose Stalgia’ which he explains as:

“We gave two perspectives [on the song]. [Kendrick Lamar] was giving more, looking from the inside of his home and how his family and his crusade through the drug epidemic affected him. I was giving you the junior high, high school start, showing you what it was and where I was at.”

Pusha also explains the concept behind another Pharrell-produced song:

“I have a song produced by Pharrell called ‘Sorry Nigga, I’m Trying to Come Home,'” Pusha T Said. “The acronym for that is S.N.I.T.C.H. I personally don’t really want to hear anymore one-dimensional street raps. This is probably the most poignant record on my album. It’s the realest record. It just speaks from the perspective of knowing people who’ve turned over in the game. No rapper talks about that. Every rapper makes you feel like…they don’t know anybody [who has become a police informant] or [that] anybody in their crew hasn’t turned over…Everybody else gonna make you think that, ‘Yeah, we was doin’ this. We was doin’ that, and we got rich and there was no hiccups.’ And there’s been hiccups.”

Also, in the video interview posted after the break, Pusha talks to DJ Skee about Kendrick’s ‘Control’ verse, collaborating with Justin Timberlake early on in his post N’SYNC days and in the very end, reveals that Kanye has contributed to 6 songs on My Name Is My Name.