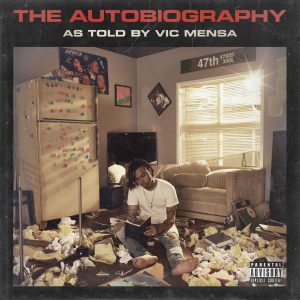 It always felt like Vic Mensa got left behind. Through all of the talent, both as a rapper and singer, it ultimately resulted in him being compared to his childhood friend Chance The Rapper or being told that he had changed. Somehow people wanted Chance and Vic to remain who they were as teenagers, even as their lives and the world around them changed dramatically. Both have gone through their trials and tribulations with drugs, depression and other headline causing incidents. But despite that, there are co-signs from JAY and Kanye, awards nominations, and tons of philanthropy. As Chance ascended into America’s family friendly favorite, Vic seemed to descend into the shadows outside of a few political protest appearances and a couple of album false starts. Last year he gave us a recap of this time in the shadows with his There’s A Lot Going On EP and in the process made us remember a lot of the attributes that helped him burst onto the scene in the first place. It was full of racial and political themes with a final closing track that turned inward and focused on the state of Vic Mensa the person. He has built upon that track with his official debut album, appropriately titled The Autobiography to give us the story of Vic Mensa.

Vic lets us know from the first words of the album that becoming a star is something that he was going to will into existence one way or another. The song ‘Say I Didn’t’ is his way of saying “I told you so” in song form. He speaks directly to family, friends and fans over a soul sampling beat that wouldn’t sound out of place on an early Kanye album. He bares his soul with a sharp flow and half sung chorus that sets the tone as a great introduction for an artist’s debut. If there’s one thing that Vic may do best and better than most of his contemporaries, it’s paint a picture of a memory or a place. He flexes this ability all over the project with one of the better examples being the Dream assisted ‘Heaven on Earth’. It’s a three part epic in the vein of ‘Stan’ that details his friends death in a robbery gone wrong. He plays with perspective and different voices in a new and refreshing way. He holds nothing back when speaking on relationships either. The collaboration with Weezer ‘Homewrecker’ is an unfiltered look at someone trying to balance love between two girls.  Vic admits his wrongdoings throughout the album and it’s that self-awareness that elevates tracks like this from good to great. The narrative continues on ‘Gorgeous’ to the point that it almost feels like a two part song in context of the album. Syd from The Internet adds nice backing vocals to the song as well.

Most of the guests that appear on The Autobiography are there more as role players than to steal the show. This makes sense when you think about the title of the album. The most in your face yet appropriate featured artists on the project are Chief Keef and Joey Purp on the Chicago anthem ‘Down for Some Ignorance’. It showcases an area that is riddled with violence that outsiders try but fail to understand. These three, while vastly different artists, all stand on common ground and create a banger. Pharrell lends his hand to the introspective ‘Wings’ as well. It’s Vic essentially saying that he is ready for a fresh start.

Vic’s style and persona has changed many times in the past three years. One of the few missteps on the album comes when he tries to hone in his rockstar persona on ‘Rollin’ Like a Stoner’. It sounds like a song that was pulled from the cutting room floor of his scrapped Traffic album from last year. The content, which surfaces around his drug abuse, is powerful, but out of place with the rest of the album’s tone. One of the brightest moments on the album comes on the semi-ballad ‘Coffee & Cigarettes’. The song recounts Vic’s first love and his resentment towards the girl and her immaturity at the time. His singing voice takes the forefront here and it shows that if Vic wanted to make a more pop leaning album, he is certainly capable of doing so. The refrain talks about a girl who was “only 17, falling in love with everything, except for me” and it perfectly paints a picture of the girl you always thought it would work out with but never did. The hook somehow seems like you’ve heard it before despite being brand new. He closes out the song with a verse that goes into even more detail about the relationship. When Vic relates to his listener with personal experiences is when his music is at its best.

Vic Mensa has come a long way as an artist and as a man leading up to the release of his debut album. He still has room to grow, but what artist doesn’t who is 24 and still finding their way? The Autobiography plays like an album that Vic needed to get off his chest before he could make anything else. Vic’s rapping is sharp and his production choices are appropriate, but his singing voice is severely underrated and underused. Some of the strongest moments occur when Vic finds the perfect fusion of his skillsets. He ends his autobiography similar to how he ended last year’s EP and flexes these skills in the process. He turns inward once again on ‘We Could Be Free’ where he delivers one of his best sung vocal performances ever about personal struggles and political uncertainties in America today. Ty Dolla Sign closes the album by taking everyone to church. Vic Mensa may not be perfect, but no one is and this album shows immense growth, both on a personal and musical level. People may still miss the old Vic after hearing this album, but The Autobiography proves that there’s plenty to look forward to from the New Vic.