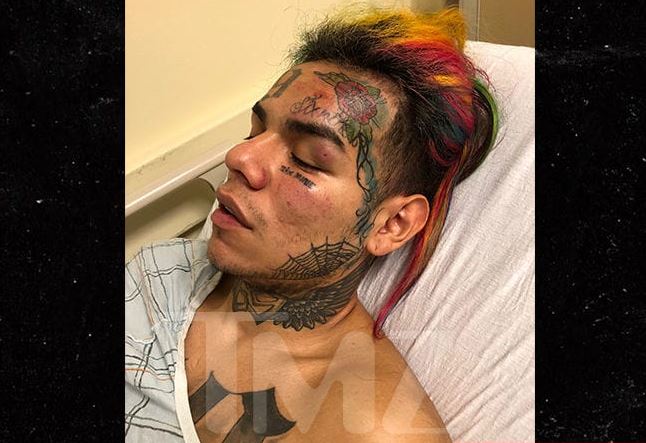 Tekashi 6ix 9ine had a very rough early morning today (July 22) was he was not only pistol whipped and kidnapped but also later robbed at his house.

TMZ reports that the rapper was working on a music video in Brooklyn early Sunday morning. He wrapped up around 4 AM and as he reached his home, another car pulled up and blocked his driveway. That’s when three gunmen wearing hoodies got out of the other car, grabbed Tekashi and pistol whipped him, knocking him unconscious.

Tekashi was then driven around at back of the car and told that if he didn’t give them the cash and jewelry they wanted, they would kill him. The gunmen then pulled up to Tekashi’s house as two persons went inside the house while the third kept waiting in the car along with the rapper in the back seat. The gunmen were able to take around $750k in jewelry and between $15k and $20k in cash from the house. The controversial rapper’s baby mother and daughter were inside the house but did not get hurt.

The gunmen then drove away with the 6ix 9ine still in the back seat of the car. At some point, he was able to jump out of the car and escape. One gunmen began chasing him but gave it up midway. Takashi then jumped into a stranger’s vehicle on the road and asked for help. That’s when 911 was called and he was taken to the hospital. He’s currently undergoing various tests by the doctors.