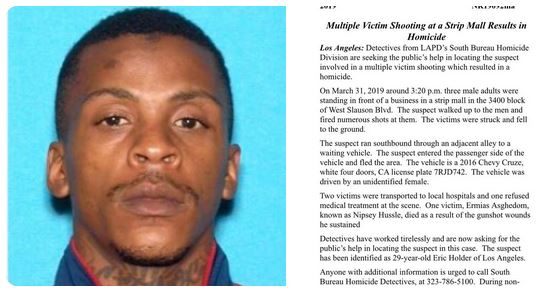 UPDATE 3: The alleged killer has been charged and is facing life in prison.

UPDATE 2: Multiple news outlets have reported that the suspected killer has been captured in L.A. suburb of Bellflower. The woman who drove the getaway car is being allowed to go free for now as she may not have known what Eric had done. 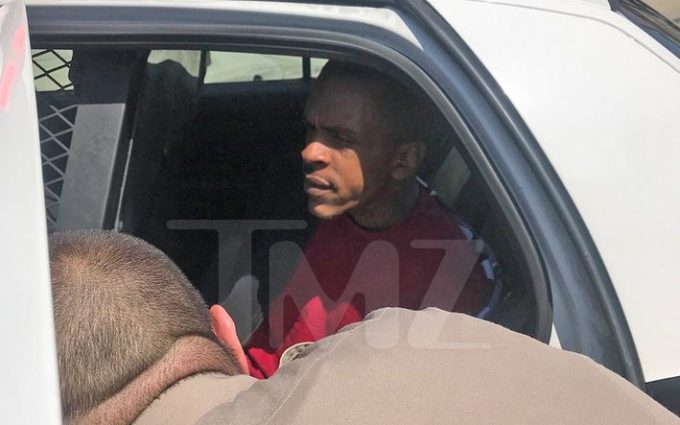 UPDATE: Deputies have captured a man they say is 29-year-old Eric Holder, wanted in the murder of Nipsey Hussle. LAPD are responding to confirm his identity. https://t.co/kuxcfehFLY

UPDATE: The LAPD police chief will hold a press conference in a few minutes to give an update on the murder investigation of Nipsey Hussle. Watch it here.

A major update in the Nipsey Hussle shooting crime. Police has now named a suspect in the deadly act, a man by the name of Eric Holder.

Los Angeles police say the 29 year old is a resident of L.A. and they are searching for him. Authorities say Holder got into an argument with the rapper before the shooting in front f his Marathon Clothing store. Holder was last seen in a white, four-door 2016 Chevy Cruze, with the license plate number 7RJD742. Detectives had earlier said that they believe the shooter was someone Nipsey knew.

Eric Holder is wanted for Homicide in the shooting of Nipsey Hussle. He was last seen in a 2016 white 4 door Chevy Cruze CA license plate 7RJD742. Anyone with information related to his whereabouts or this deadly shooting is urged to contact South Bureau Homicide at 323-786-5100 pic.twitter.com/3pX4fbezDs

Police is requesting that anybody with information about Eric Holder can contact South Bureau Homicide at 323-786-5100.

A surveillance video (which we will not share here) showed the person shooting Nipsey once and moving away, then coming back and shooting him twice more. A vigil on Monday night for the rapper outside the store where he was shot resulted in chaos. Rumors of gun shots led to stampede with several people injured.