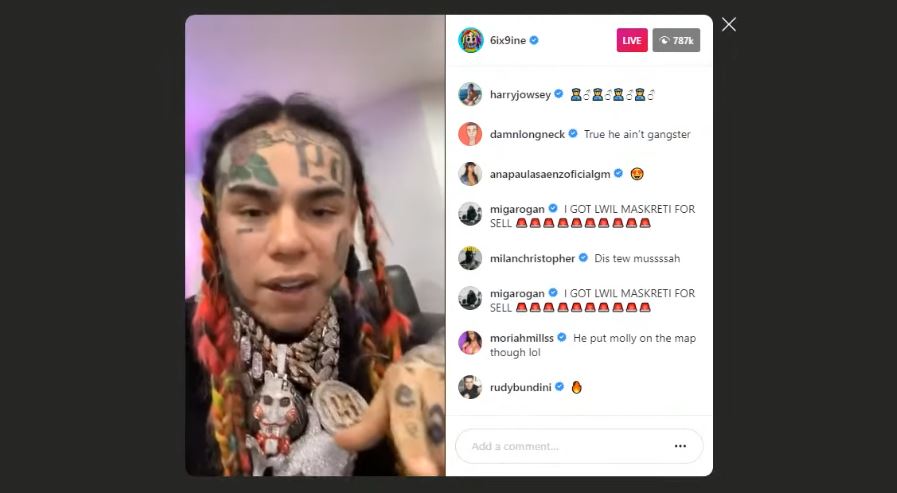 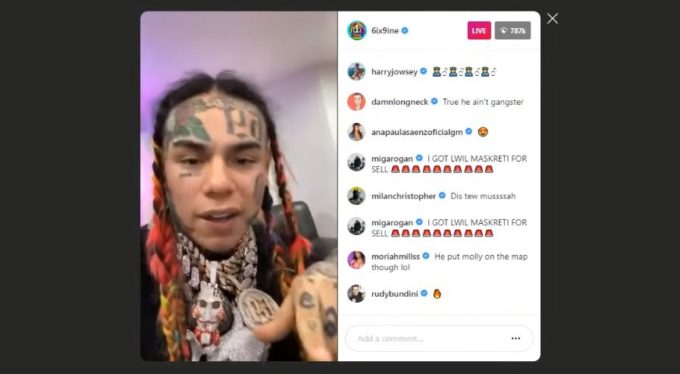 6ix9ine is at it again. Before dropping his new single ‘TROLLZ‘ with Nicki Minaj, the controversial rapper went on Instagram Live to diss some of his critics: Meek Mill, Future, Snoop Dogg and more.

Tekashi was no holds barred as he attempted to rip through Meek Mill over him being signed with Roc Nation that 6ix9ine claims has a CEO who is accused of snitching. The rapper named Roc Nation CEO Desiree Perez and claimed that she was a cooperating witness for the Drug Enforcement Administration (DEA) in the 1990s.

He also went in on Future, calling out the Atlanta rapper’s friendship with Meek, his many baby mamas and the drug references in his music.

You go and say if you hang out with a rat it makes you a rat,” he continues. “You just posted that. So, what does that make you? ’Cause you hang around Meek. You hang around these n*ggas. What does that make you? Are there levels to the snitching? Help it make sense. We all know, homie. I am half your age. You’re an old head to me. I’m half your age. If you’re mad that I can chart. Listen, I don’t need Drake to have a platinum single. I don’t need Drake. You and Meek Mill need Drake so yall can chart.”

Before going in on Snoop Dogg whom he has called a snitch on social media in the past, he went after Future again.

“Future, you can’t take care of your kids, right. You can’t compare me to you because I have no communication with my baby mama as she’s having sexual relationships with my co-defendants. Imma stay away till I’m on house arrest. Something you don’t know about, you rap about all these drugs — percs, mollys, never got arrested for no drug offense,” Tekashi said.

You can watch Tekashi’s full Instagram live session below where he was later joined by Nicki Minaj.