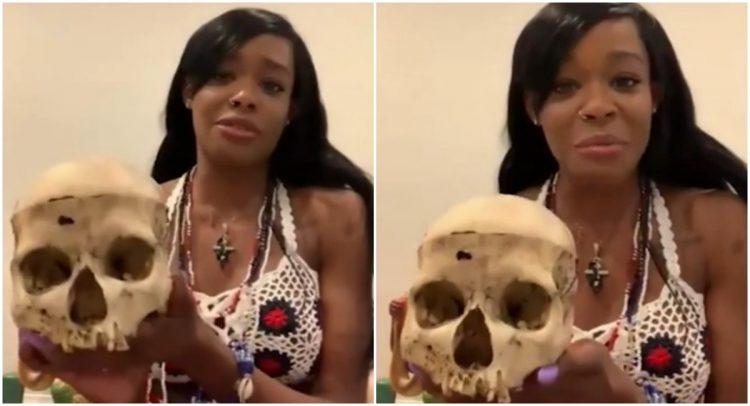 Azealia Banks is certainly not your average rapper and for long, fans believe she has not been in a very stable mental state. A few days ago, there were reports online claiming she had eaten her dead cat after digging her up. She now surprises Australian radio hosts by showing off a skull during a live interview.

The rapper was chatting with Kylie and Jackio on their Kiss 1065 radio station show when she casually pulled a skull to the camera. She told them that it was of a 6 year old who died from head trauma. “If you check on your card, drivers license, to be an organ donor, they’re not just picking out a healthy heart and picking out a healthy liver, they are bisecting every part of your body and selling it. There are lots of scientific research sites where you can actually buy human skulls, like this one,” she said.

The hosts were obviously quite shocked by what they were seeing so they asked her why she had the skull of a child in her home and where she got it from. “I got it from boneroom.com, and this is the skull of a six-year-old girl who died from head trauma. I love bones. I respect the afterlife. I think the bones are where the energy holds for a person.” Watch the clip below.

She then addressed the rumors that she ate a dead cat during her Instagram live session. She said that the story got out of control a bit and that she didn’t actually eat it. She said the cat struggled with problems with his kidneys for a number of years and then sadly died due to a poor diet. “I didn’t eat the cat. I would not eat a cat that’s been dead for three months,” she added.

“I wasn’t conformable doing that so I let him die peacefully at home, then I buried him then I dug him up to get his skull so I could clean it up and have it.”