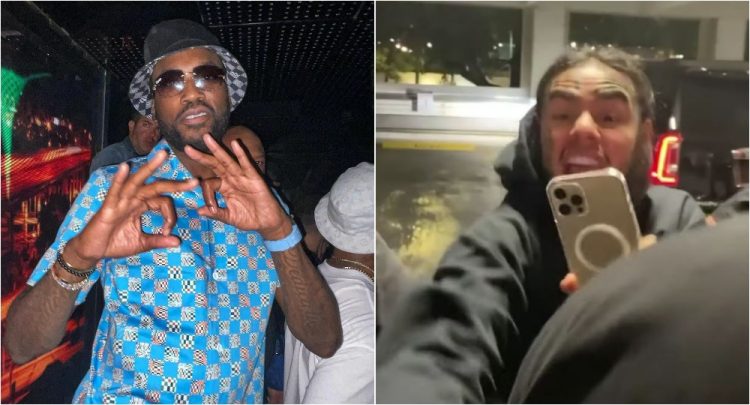 The two were reportedly partying separately but bumped into each other in the parking lot. According to Meek, Tekashi set up the situation so they could come face to face.

Sharing the footage of the incident on Instagram (and later deleting it), Meek wrote: “The feds sent him to take me out wtf. [I] had to spit on him so he retreated lol he really waited outside the club for me. I thought I was dreaming wtf we almost smoked him lol he posed a lil threat popping up in the parking lot waiting for me.”

In the video which you can watch below, the two are yelling at each other and filming at the same time, while security guards are trying to keep them apart and defuse the situation.

“Why 69 just run up on me wit a bunch of cops so I spit on him,” Meek wrote. “I thought I was dreaming…he waited outside for me with the feds wtf.” He added, “They did all this to go viral. Leave me alone rat.”

The Philly rapper later went to Twitter to add to the incident, saying “We did not run into each other. I was getting in my car he just popped out….we almost was smoking on that 69 pack for the love of a viral moment. He tryna to get something locked up no cap.”

We did not run into eachother I was getting in my car he just popped out ….we almost was smoking on that 69 pack for the love of a viral moment ….. he tryna get something locked up no cap lol

Tekashi was released from prison in April after pleading guilty to racketeering conspiracy and other charges. He was put on house arrest per the terms of his early release but is now reportedly off home confinement. Earlier this month, he previewed a new song on Instagram, ending a long spell of disappearance from social media.