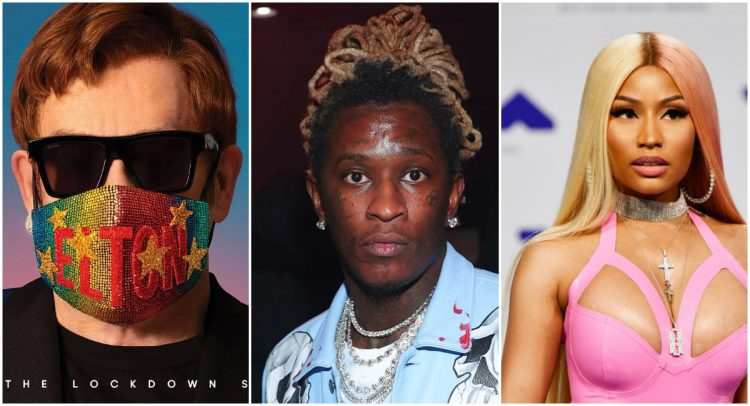 The much awaited collaboration between Elton John, Young Thug and Nicki Minaj is finally here.

Fans were quite excited about this song when it was announced as part of the track list for Elton’s new album The Lockdown Sessions which comes out in full tonight (Friday) across all DSPs. The lead single with Dua Lipa, ‘Cold Heart‘ is out right now and doing quite well.

“I never thought you would end up as the enemy / I always thought you’d be right here, still defending me / I feel so bad for you, lost your identity / Made your decision, it’s a penalty / It’s so hard for me to understand,” raps Nicki on her verse.

“This was one of two songs I wrote the first day I spent in the studio with Andrew Watt, but it began its life as very much an Elton John song and I didn’t really like it, it needed something. And that’s what Andrew did, he chopped up the song and moved the chorus to the beginning, and put on a track that a rapper would use – it was brilliant! That’s when we got Young Thug involved. I’ve admired Young Thug for a while and he sampled one of my songs on his track, High, back in 2018 so it was great to collaborate again,” said Elton about the track.

“And then, I was so pleased when Nicki agreed to do it. I’m very grateful to have such talented artists from a totally different genre to me on this album and that they’ve included me,” the legendary artist continued. Listen to the impressive song below.