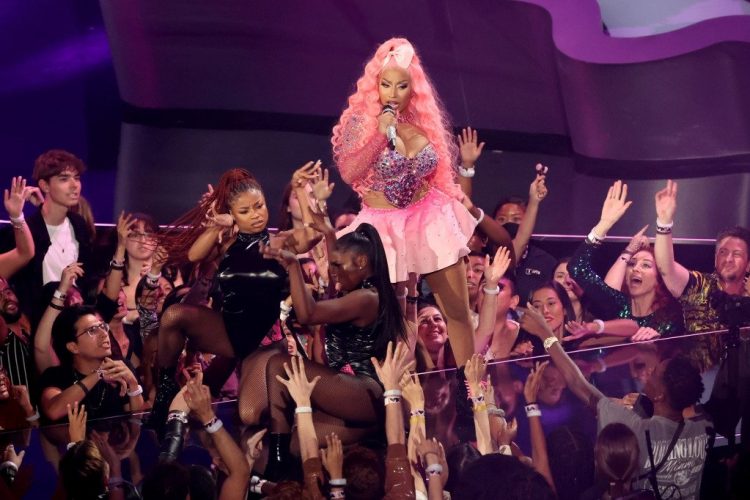 Nicki Minaj is essentially the woman of the hour at the VMAs because tonight, she received the Michael Jackson Video Vanguard Award which has previously gone to artists like The Beatles, Kanye West, Beyoncé, The Rolling Stones, The Beatles, David Bowie and more. It’s very prestigious company to be in.

Before receiving the award though, Nicki had some stage time at the show. She performed an incredible medley consisting of songs that included ‘Roman’s Revenge’, ‘Chun‐Li’, ‘Moment 4 Life’, ‘Monster’, ‘Beez in the Trap’, ‘Anaconda’ and ‘Super Bass’ which got Taylor Swift smiling and singing along in the audience.

Of course, Nicki also belted out her brand new hit ‘Super Freaky Girl‘ which is taken from her upcoming new album, coming soon. The performance at the Prudential Center in Newark, NJ, marked the 39 year-old’s return to the VMAs stage for the first time in four years.

While accepting the award, Nicki shouted out the Barbz and the artists who have inspired her over the years, including Kanye West, Lil Wayne, Britney Spears, Rihanna and Drake. “Let me tell you something … I never, ever in my life have written a speech, and today I jotted something on my phone … first of all, to everyone in here, thank you and God bless you,” she said.

“This was in my spirit to say. I wish that Whitney Houston and Michael Jackson were here. I wish people took mental health seriously … even when you think they have the perfect lives.”