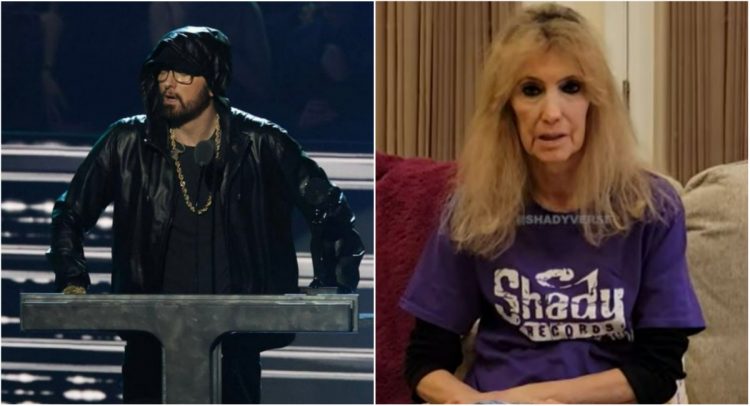 Saturday was a big day for Eminem as he officially got inducted to the Rock & Hall Hall of Fame.

Dr. Dre, the man who signed him to Aftermath via Interscope and gave him his big break, did the honors. Fans and musicians around the world are congratulating Em on the recognition but one important person who has also sent her wishes is his mother, Debbie Mathers.

In a new video which has surfaced online, Debbie’s friend Christina introduces the lady who goes on to congratulate her son on the big achievement. Wearing a Shady Records purple shirt, she says: “I want to say, Marshall, I could not let this day go by without congratulating you on your induction to Hall Of Fame. I love you very much. I knew you’d get there. It’s been a long ride, I’m very very proud of you. And also, I’m very proud of Hailie Jade, my baby girl. And I want to tell you.. great job on your podcast. God bless you guys. I love you very much.”

As we know, Eminem and his mother have had a rocky relationship with Em infamously using foul language against her in several of his songs. Debbie even sued her son for defamation back in 2001 which was later settled. The video above is even more heartwarming as this is the first time in years that Debbie has been seen on camera.

In 2014, Eminem released his song and video ‘Headlights’ where he apologized to his mom. “But as stubborn as we are, did I take it too far, ‘Cleaning Out My Closet, and all them other songs?” Eminem rapped on the track.

“But regardless I don’t hate you. ‘Cause ma, you’re still beautiful to me. ’Cause you’re my mom,” he continued. He even featured her in the video which you can watch here.