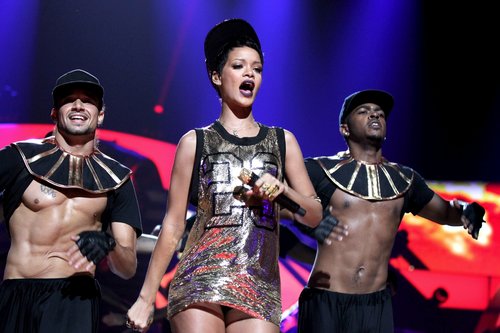 Rihanna co-headlined the iHeart Radio Music Festival in Las Vegas last night. Sporting her new short hairdo, the Bajan singer performed some of her most popular tracks including ‘Only Girl’, ‘Disturbia’, ‘We Found Love’, ‘Talk That Talk’, ‘Umbrella’, ‘Cake’, ‘What’s My Name’ and many more.

Following the performance, she did an interview with Elvis Duran where she formally announced the title of the first single from her forthcoming 7th studio album. ‘Diamonds’ impacts radio on Wednesday (September 26th) morning. Do you think Rihanna can pull off another commercial success in this era?