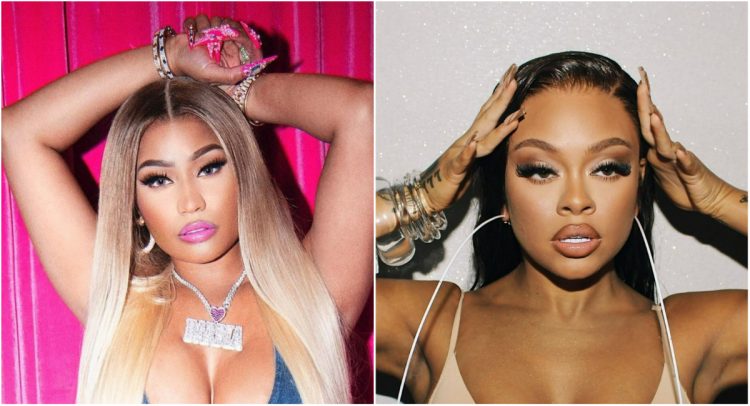 Things between Latto and Nicki Minaj turned sour today on Twitter following Nicki calling out the Grammys for classifying her ‘Super Freaky Girl’ submission in pop rather than rap category.

The song, which is presently in its ninth week at No. 1 on Billboard’s Hot Rap Songs list, should be treated like similar hits, according to Nicki during an Instagram Live session on Thursday (Oct. 13). She made a reference to Latto’s hit ‘Big Energy’ for comparison.

“Now, let’s say that ‘Super Freaky Girl’ is a pop song,” Minaj said. “Let’s just say that. What is [Latto’s] ‘Big Energy’? … If you move ‘Super Freaky Girl’ out of rap and put it in pop, do the same thing for ‘Big Energy.’ Same producers on both songs, by the way. So let’s keep s### fair. Even when I’m rapping on a pop track, I still out-rap.”

She also shared a screenshot of a DM from an artist who said Nicki was using their name and song to prove a point. Nicki said, “This Karen has probably mentioned my name in over 100 interviews,” Nicki wrote alongside the screenshot. “Says she waited in line for Pink Friday w|her Barbie chain on, bangs, pink hair…but today, scratch off decides to be silent; rather than speak up for the black woman she called her biggest inspiration. 🫡☺️😘”

Soon after, Latto took to Twitter to confirm she was the person in question and responded to Nicki. “1st of all I texted u cause I didn’t wanna do the internet sht w sum1 I looked up to. Just like the 1st time I DMed u asking about ur ongoing subtweets. I wanted to speak up cuz like I said I do agree but the way u going about it seems malicious esp. after how we left off,” Latto began.

“I’ve ignored countless subtweets since March and instead addressed u in the dm. You’re asking why I didn’t speak up in ur defense… it’s the same answer I gave u when u asked why I didn’t congratulate you. Ur literally older than my mom tryna be a bully @NICKIMINAJ,” she added.

Nicki quote-tweeted Latto’s post with some shots, writing, “All this time I thought you was at least 35.”

All this time I thought you was at least 35. https://t.co/9y1PPOtcLo

The most recent subtweet in question… but I’m finna start from the beginning #40yroldbully pic.twitter.com/3e7pKOskNY

With all this being said this wasn’t JUST about a Grammy category. U being funny bringing me up to defend ur case knowing our last convo didn’t end on good terms. U literally told me I’m not “flourishing” and no one cares about my “little song” otp lol @NICKIMINAJ

Things spiraled from there into much more insult from each side with Latto calling Nicki being associated with “rapists.” Nicki then asked her followers why Latto didn’t have a problem with working with Dr. Luke who has been accused of sexually harassing Kesha.

The two artists also threatened to release reference tracks to the public, to shame each other.

🤣😩 it was an actual person ON tiktok. A creator. Not even an artist. I’m sure the Barbz have receipts. It goes to show she made up these “subtweets” in her head simply b/c she sent me 2 songs I declined to do features on. They all do this. (See next tweet) https://t.co/8gM2oU9IIy

Who wanna hear the reference tracks of scratch off ghost writers rapping her bars????? 🤣 she used me & the Barbz in every interview until that album sold double wood 🪵 now she wiping that spray tan off & being a Karen. They black when it’s beneficial chi

Now pay attention. every dm from scratch off is about a feature. I was kind every time. But scratch off feels she has pull behind the scenes w|a few diff white men (won’t name right now) Now look @ my next tweet to see the very next message she sent me after I declined 3 features pic.twitter.com/MegkLa7Ht9

Look @ how this Karen makes up a fake beef in a passive aggressive attempt to show her frustration about me politely declining 3 feature requests. Scratch off is just an entitled Karen who blames others for her album flopping. 🫵🏽 betta stop it scratch off pic.twitter.com/4RFDlLGcfP

I’ll post em my got damn self. They’ll all tell u I WRITE TOO! I heard a few of ur refs before they came out too boo. U forgot WE ALL collab w the same writers?? Difference is I don’t deny it. The world seen me writing since 16 on national TV tho ✍️🥴 https://t.co/cVcb0l5LN3