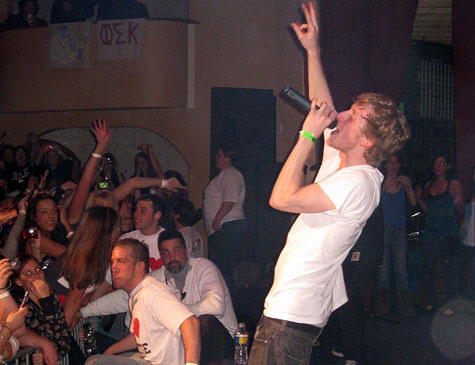 You know, when it’s album release time (Asleep In The Bread Aisle, 4/20), it becomes quite tough to keep up with these interviews. With Asher Roth, it has certainly gone a level up. Next up is an interesting interview Asher did with John Jurgensen from The Wall Street Journal. Check it out below.

The Wall Street Journal: At a recent listening party for “Asleep in the Bread Aisle,” you introduced your album saying it was bringing together people from all walks of life. Is that something that’s missing from rap music?

Asher Roth: Especially now. Originally, the whole thing was about uplifting and enlightening people and having a party. When it became all about selling records, it really got tainted.

WSJ: How exactly are you bringing people together?

Asher Roth: It’s hip-hop music, so it’s not like we’re out there holding hands. But it’s forcing people to talk and get a lot of things off their chest. Unlike Eminem, I’m classic white. I’m talking about yoga and yogurt covered in fruit. I represent more of a suburban middle-class lifestyle. If we can start in hip hop and accept people for who they are and what they’re talking about, rather than the color of their skin, we can turn it into a global thing. Hip hop is a beautiful place for asking more questions.

WSJ: For years people have been saying that the majority of rap fans are people like you — white kids from the suburbs. If that’s the case, why have there been so few to break out?

Asher Roth: Besides the white guys who sell it and push it, hip hop is black music. But it got to the point where they were targeting us, the white people in the ‘burbs. We got brought up on it, but suddenly when a 23-year-old white kid who’s been inspired by Jay-Z starts rapping, it’s a bad thing? C’mon, those [rappers] were talking to us the whole time. It’s interesting to see what this is turning into. I was just this punk kid rapping to the laptop in my sophomore year in college. That’s what hip-hop has turned into.