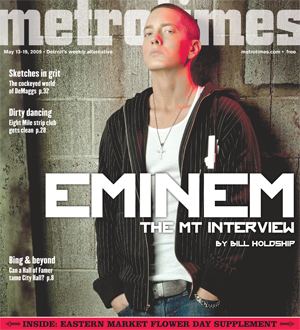 Talks about being an artist from Detroit, his drug problem, Proof, the album Relapse, new rappers, guns, Bill O’Reilly, being in touch with Elton John, Kid Rock & T.I. and much more.

MT: I’ve read that Relapse, the new LP, harks back to a simpler time for you. I’m curious as to whether nostalgia played any role in the creation of the new album, particularly nostalgia for Detroit?

MT: In the sense of looking back at your past?

EMINEM: In the sense of looking back at my past … I’m sorry. Can you repeat the question?

MT: Sure. I’ve read that the new album, Relapse …

EMINEM: Oh! OK, I get what you’re saying. Yeah. Well, conceptually and musically, the new album does go back. I don’t know if it’s nostalgia but the record probably feels like maybe somewhere along the lines of the first two records. You know? I guess in that sense of nostalgia or whatever, it’s like it’s kinda going back to the feel of those two records