Needle On The Record #3 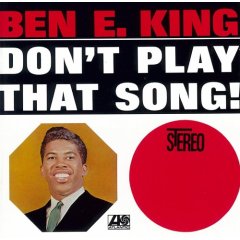 Wow, it’s taken a long time for me to the 3rd in these series. It’s here now and we have a classic smoother today.

This track appeared on the American soul singer’s third studio album Don’t Play That Song! released back in 1962 on Atlantic Records as a LP. I’ve always loved this record which is almost in my system courtesy my elder brother who used to play it often in the house when I was a little kid.

On the song, Ben King sings about old memories and heart-break while the ladies on the back vocals keep chanting ‘Darling,  I love you’. Strings swirl, the percussion oozes, and a desperate Ben E. cries over and over, ‘You lied!’. Listen to this!