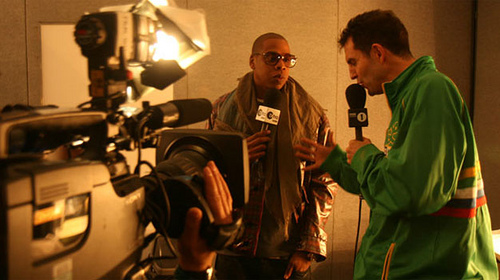 Jay-Z talks to Tim Westwood and Hov touches upon the new single ‘Run This Town’ with Kanye & Rihanna, The Game, and the rumors about BET’s allegations about Chris Brown not being allowed to perform at the BET Awards because of Jay-Z’s wish.

Thanks to DDotOmen for the heads up.

Bonus: Green Lantern gives his 2 cents on the Game/Hov beef


“When you say somebody’s name, be prepared for anything to happen, So Jay was probably like ‘Whatever,’ felt like saying his name and Game was like, ‘He said my name, I’m going in.’ So it is what it is. I’m not surprised at all by any of it. I’m quietly entertained on the sideline, that’s pretty much it. I heard [the diss]. Game goes hard and that’s all, you know, Game goes hard like intensly hard. But that guy Jay-Z, if he puts his mind to you, it’s gonna be something. It’ll be interesting to see how that’s gonna play out. I scratched my head on some Amber Rose line, Kanye’s girl, the line in the record, but, that’s Game, man. Game is a savage, an animal. He’s just gonna spray the whole parking lot…It is what it is, these are two grown men that make way more than me so big up to both of them, put your gloves on and just keep it in the ring..I don’t think none of that is violence at all. But you never know.”