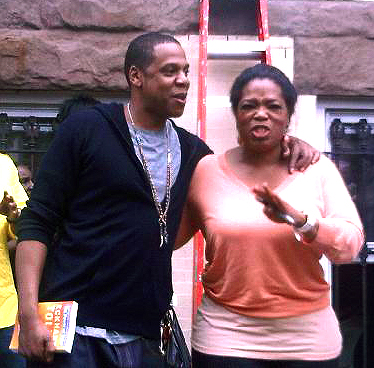 The complete interview will be available in the October 2009 issue of O, The Oprah Magazine, on newsstands September 15th.

Oprah: So tell me how you got into the drug dealing.

Oprah: Because drug dealers were your role models. There wasn’t a teacher or a lawyer or a nurse or a doctor or an accountant in the neighborhood?

Jay-Z: Well, we were living in Marcy by then, so, no. And if anyone did become something like that, they moved out. They never came back to share the wisdom of how they made it. If anyone made it, you never knew it. That’s why I’ve always said that if I became successful, I’d come back here, grab somebody, and show him how it can be done.

Oprah: So by the time you were 13, this was a way of life. Did the lifestyle frighten you?

Jay-Z: No. It was normal. And at some point, you become addicted to the feeling. The uncertainty and adrenaline and danger of that lifestyle.

Oprah: What happened in each situation?

Jay-Z: It was one situation, three shots.

Oprah: So he was a bad shot.

Jay-Z: Well, no one really practices shooting a TEC-9 machine gun, right? And when you’re a kid, with little bony arms—no wonder nobody could aim.

Oprah: Many of the little boys who grew up in the Marcy projects are either in jail or dead. Why do you think you got to grow up and buy your mom a house?

Jay-Z: There’s the gift, there’s the spirit, and there’s the work—all three have to come together. If one of those things is off, it can stop you from becoming who you were meant to be.

Oprah: When I met you a few years ago, we discussed our disagreement over the use of the N word and misogynist lyrics in rap music. Do you believe that using the N word is necessary?

Jay-Z: Nothing is necessary. It’s just become part of the way we communicate. My generation hasn’t had the same experience with that word that generations of people before us had. We weren’t so close to the pain. So in our way, we disarmed the word. We took the fire pin out of the grenade.