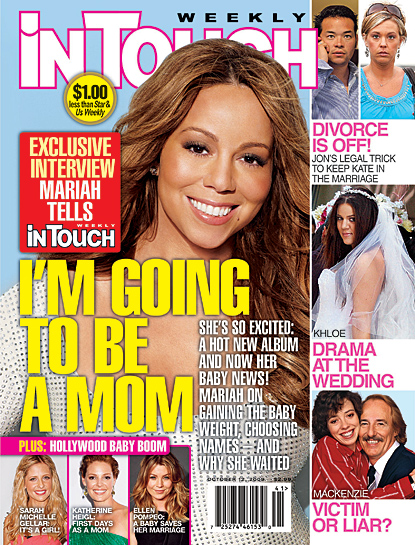 In an interview with In Touch magazine, MC has come out in the open about her insecurities in life going to the extent saying she thought she was going to die soon.

I have always been grateful for everything I had, but my personal life was a mess. So many artists just exist for their careers and then burn out quickly. That was me before I met Nick, and he helped me. I always thought that I wouldn’t be here at this point. I was thinking, ‘Okay, I’ve got another year of my life left. This has got to be the end of it.’ Finally, he was like, “Stop talking like that.”

I have been obsessed with the whole Marilyn Monroe thing my whole life – all those artists who died young,” she says. “Michael Jackson. At one point, we talked about that stuff. I can’t reveal what he thought. But yes, we had a conversation about it once.

In related news, Mariah may miss the top spot on Billboard next week with projections about her Memoirs Of An Imperfect Angel album first week sales only looking to be around the 170k mark.