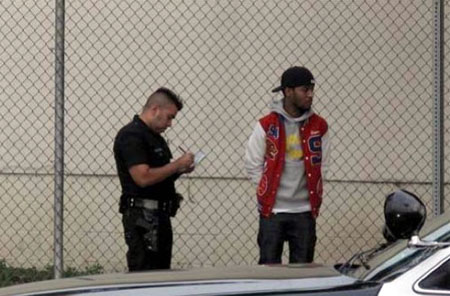 Cudder’s lovely days continue. After being kicked out of the lady GaGa tour because of the fan punch, he landed in trouble in LA yesterday after a photo shoot with NME as the Police detained him for suspected burglary. He was later released being a clear case of mistaken identity.

Two police cars cordoned off the road while a further three pulled up next to Cudi’s vehicles. Passengers in the cars were then ordered out with their hands on their heads, before being made to kneel on the ground where they were handcuffed. It was only then that Los Angeles Police Department officers realised it was a case of mistaken identity.

Who knows, really, the story changed a bunch,” he said. “I’m just happy to be back. I’m a free man! For that moment I was not free. I was in handcuffs. It did not feel very comfortable.”

He added that he did not begrudge the police for the error: “We’re in LA, it’s a rowdy place in the United States, you know? And a lot of shit goes down. And these cops have to use force. So it’s, like, I understand that they were doing their job. I just wish we weren’t in that place at that time.”

Update: A rough video of the incident is now available. Hit the jump.