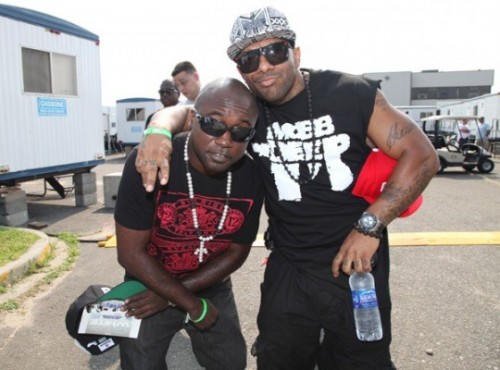 In a pretty bizarre turn of events, Havoc took to his Twitter late last night to openly diss his Mobb Deep partner of 20 years, Prodigy. What exactly triggered it is still unknown but it seems like it isn’t a case of a hack. Devi Dev from Shade 45 has confirmed it and even G-Unit/G-Note’s Hot Rod proclaimed multiple times that it is “real”. Sad development indeed. RIP Mobb Deep?

@prodigymobbdeep we got a meeting, lets see if u built to show ur face. prodigy abitch and I’m gonna show it, follow!! ground breaking new. i got niggas in the jail system to to back up that prodigy was fucking homes in jail. prodigy prove me wrong! please. i have a big announcement…. and niggas that was locked wit him know the truth. now i will silence…. and let the jails take care of the rest. thats on everything, i had to smack P ask him. prodigy u pussy! u long island ass bitch. I’m about to expose u! i can’t wait till niggas in jail that was wit u back my shit up!! next time i see u , u getting layer out, on camera!! i can’t wait! how u say u live in jersey, but right there in queens??? I’m on top of u… pause… foot on thy neck!!! in a minute…. niggas that was in the jail wit him gonna blow him up first hand.!!!! prodigy a hider not a rider. nothing hacked P homo y’all. no hack this havoc.

UPDATE: Havoc has rebuked the “diss”, saying he left the phone at a gas station. Read his statement to RapRadar after the jump.

STATEMENT FROM HAVOC OF MOBB DEEP.
“Just getting back into NY after my Easter weekend with family and friends in Jersey. I left my phone at a gas station yesterday evening while on my way to Jersey after a glorious Knick’s game. To all Mobb Deep fans: it’s business as usual! It’s Mobb Deep all day!!! My twitter account @THEREALHAVOC will be down until further notice. The only other real account is @PRODIGYMOBBDEEP. Ignore the rest. One!”