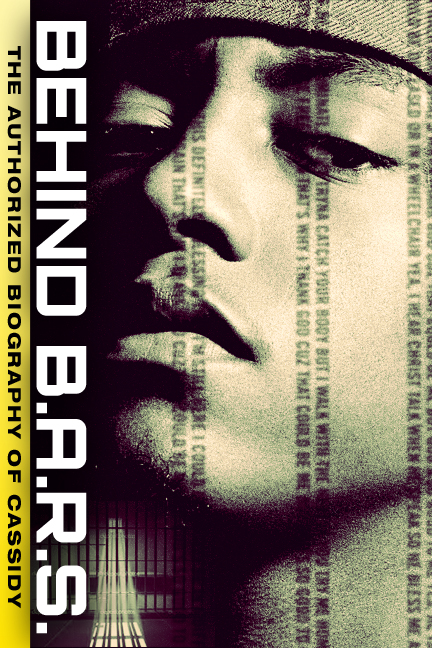 Cassidy’s new Hip Hop E.P. and Book Behind B.A.R.S. in collaboration with Pastor Jomo K. Johnson of Philly Open Air Church is finally available for purchase. This is also the first Rapper/Pastor collaboration of its kind. Today, we bring an exclusive from the soundtrack, the soothing ‘Sunday School’.

“Behind B.A.R.S.” takes the reader through a harrowing journey of the rise, rhyme, and redemption of the the Greatest Battle Rapper of our generation. Both tragic and triumphant, exhilarating and exciting, all fans of Hip Hop will be shackled by this amazing journey.

After the jump, you can read the Psalm 118 Chapter from the book.

It has been said, if you want to know who your friends are, get yourself a jail sentence. It was during my incarceration that I would learn the one true friend would always be there for me. I was still in protective custody. This meant that for 23 hours a day I was on lock-down. As you can imagine the only thing to do in a cell for 23 hours is to work out and read. I chose the latter. Little did I know that in the place of my most trying moment I was about to discover the greatest lesson in my life: I was not alone.

It was right before lockdown. It was an important time of the night. There was only about 30 minutes before they shut off the phones. I was in a heated conversation with my mother. My case was looking bad. As mentioned earlier I was facing life without parole if I was found guilty. Something had to change but I didn’t know what. Was it my lawyer, the judge, my defense? I had to figure out something. And because my mother was overseeing the whole process of my case, she would have to be the one I communicate with.

“I think we need to get a new lawyer” I told her as she tried to calm me down. She could tell I was anxious. She was trying to give me her advice but I didn’t want to hear it. I knew what was best for me, or so I thought. I wasn’t being disrespectful but I was being direct. My life was on the line here. We both were trying to get our points across but neither of us could hear each other past the emotions of the phone call. I don’t know how it happened but what started as a routine conversation evolved into a full blown argument. And before I knew it I heard that final call from the CO, “Lights Out!” In an instant the phone went dead. The phones had been cut off. And what was worse was that my conversation had ended. It finally hit me. I was letting this case, this trial, this whole thing get me so anxious that I would argue with my mother to the point of not even being able to say I love you at the end of our conversation.

I tried to hide the tears but only in front of others. But when I got to my cell the tears begin to flow. Not only was I emotional about the case I was upset with myself for the way I handled the phone conversation. I love my mom more than life. It hurt me that our conversation would end in a shouting match. This whole situation, the trial, my incarceration, lockdown enabled me to see how absolutely powerless I was in this situation. I needed help from a higher power. And that higher power was God. So I fell to my knees and begin to pray.

THE STORY OF GIDEON
I remembered a Bible story that I had read earlier on in my incarceration. It was in the Old Testament about a kid named Gideon. I begin to remember that God called Gideon to go to war against Israel’s enemies. God told Gideon that he would have victory but he was scared. So Gideon asked God for a sign. He wanted confirmation from God. The story goes something like this:
Then Gideon said to God, “If you are truly going to use me to rescue Israel as you promised, prove it to me in this way. I will put a wool fleece on the threshing floor tonight. If the fleece is wet with dew in the morning but the ground is dry, then I will know that you are going to help me rescue Israel as you promised.”And that is just what happened. When Gideon got up early the next morning, he squeezed the fleece and wrung out a whole bowlful of water.

Then Gideon said to God, “Please don’t be angry with me, but let me make one more request. Let me use the fleece for one more test. This time let the fleece remain dry while the ground around it is wet with dew.”So that night God did as Gideon asked. The fleece was dry in the morning, but the ground was covered with dew.

The story ends like this: Gideon goes to war with a small army and wins because God gave him confirmation. After remembering the story about Gideon I told God that I believed that He was the same God today as He was way back then in Gideon’s time. And because He was the same God I needed a sign too. My life was in a battle and I believed I was innocent of my charges. I decided to ask God for a sign.

PSALM 118:8
I took my Bible from off my desk. In the back it had all these interesting facts about the Bible.  I remember it saying that there was a total were one thousand eleven hundred and eighteen chapters in entire the Bible. It also said if you cut the Bible in half that the middle chapter and middle verse would be Psalms 118:8. I decided to look at that verse. I was amazed when I read it. It said, “It is better to trust in the Lord than to put confidence in man.” It seemed to relate to the conversation that I had with my mother that night. I was so busy putting my trust in men, (lawyers) that I had forgotten that there exists a good God. It was this same God that saved me when I was a baby. And it would be this same God that would save me now that I was an adult. After reading this I realized that it did not matter what judge I had or what lawyer I hired. I slowly began to understand that if it was God’s will for me to get out then I would get out.

I decided to put God to the test. I took a deck of cards and cut them eighteen times on my bunk. I spoke to God as humbly as I possibly could. I told him that if I picked a card between 1 through 8 then I would know that I would lose my case. But if I picked a card from 9 to king that he would give me victory. So I shuffled the cards. The first card I picked was the queen of hearts. Something in my mind made me think of my mother. Could it be that the queen represented my mother and the heart represented the love that I had for her. (Possibly, but I knew that it wasn’t a card 1 through 8!) I decided to ask for further confirmation so I cut the cards again. This time, I drew the jack of diamonds. I saw that as representing me getting out of jail and being able to get out and shine in the world again. This all seemed incredible. I thought it might of been a coincidence. Maybe I was reaching. I decided that I had tested God enough for one night. I thanked Him and went to sleep.

FURTHER CONFIRMATION
The next morning I was the first man on the phone when they called yard. I had two things on my mind. The first was to apologize to my mother. I never wanted a conversation to end the way that it did the previous night. And the second thing on my mind was the night before with the cards. I still had doubts about the cards. But I thought to myself that just maybe if I asked my mom to pick a card and it lined up with the ones I picked, that I could rest assured that God had given me the sign I was seeking.

The apology went quickly. (It’s amazing how quickly moms can forgive their children). I then asked her to pick a card out the deck. “What?” she asked as if I was crazy. I didn’t want to give her the full story but wanted to really see if there was a full connection. After insisting on her picking she finally relented. “Queen of spades and the jack of diamonds,” she replied hesitantly. When she spoke those words I almost dropped the phone. I couldn’t believe what I was hearing. “Really,” I replied.

Mom told me her reasoning. One of her favorite card games was Pinochle.  I remembered when I was younger that she actually taught it to me and my brother. We used to play it when I was younger. It was a family game. So even when I became an adult I could go to my mom’s house and most of the family knew how to play.

She continued speaking as if I had forgotten how to play. She said if you get a queen of spades and a jack of diamonds you win. The pinochle deck starts at 9. (I remembered that I asked God that if I got a number between 1-8 that this would show me that I would lose my case.  So for mom to pick these cards with no possibility of selecting those numbers showed me something.) She picked the jack of diamonds, one of the cards that I picked. To me this was a confirmation that I was going to beat my case.

And this is exactly what happened. After spending 118 more days in jail I was finally released after beating my case in trial. God answered my prayer, gave me a sign, and delivered me from a potential life sentence. I learned something that will stay with me for the rest of my life: that it is better to trust in the Lord than to put confidence in man. Praise God.