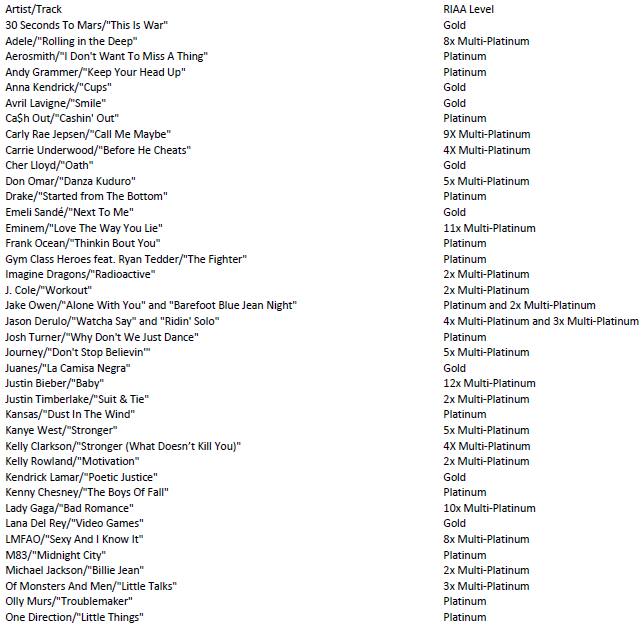 In a significant development today, The Recording Industry Association of America (RIAA) has announced the integration of streams to its historic Gold and Platinum Program. As per the new format, On-demand audio and/or video song streams will now be counted towards the 500,000 (Gold), 1,000,000 (Platinum) and 2,000,000 plus (multi-Platinum) certifications. This includes streams from on-demand services like MOG, Muve Music, Rdio, Rhapsody, Slacker, Spotify, Xbox Music and others, plus video streaming services like MTV.com, VEVO, Yahoo! Music, YouTube and more. This follows Billboard’s similar policy of including official YouTube streams in their data, adopted in February this year.

This would mean that the stream data will also be added to the already certified songs which will enhance their status. For example, according to the just released new awards, Eminem’s ‘Love The Way You Lie’ is now 11x platinum. According to RIAA, “On-demand streams on digital music services that are authorized by and reported to the record labels, whether paid for by the consumer through a subscription or free to the consumer through ad-supported services, will be accepted for RIAA certifications.”

“Including music streaming in Gold & Platinum awards marks the continued evolution of the industry’s premier program for recognizing artistic achievement, and it reflects the wide spectrum of ways consumers enjoy music from their favorite bands. The music business, along with its incredible array of digital service partners, is offering fans more access to music than ever before. We’re thrilled that our awards will now more fully recognize artists’ commercial success today.”

After the break is a list of the first batch of refreshed certifications released today.