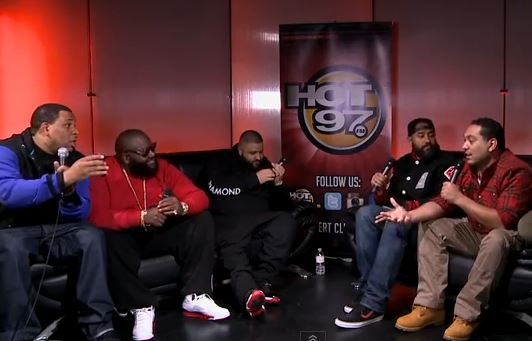 DJ Khaled and his friend Rick Ross were the latest guests on Hot 97 Morning show where they were interviewed by Ebro, Cipha Sounds and Rosenberg. DJ Khaled was the first up solo who got into an argument with old friend Cipha Sounds because the latter accused the former of changing as a person due to success. After things started to get heated, Ebro defused it and tried to sort out their personal issues on camera.

After Rick Ross spoke on his hustle, business ventures and new album Mastermind, he revealed right at the end of the interview (36:40 mark) that his next single from the album will feature Jay Z. Will they work their magic again like they did on ‘F**kwithmeyouknowigotit’? We’d have to wait and see.

UPDATE: The song is called ‘Devil Is A Lie’ and after the break, Rozay speaks on the latest collaboration.

We’re pushing the envelope once again and it’s just one of those records I can’t wait to hit the streets.”

“We went in another direction but it’s just one of those records that’s gonna speak for itself and everybody’s gonna have their opinion of it,”