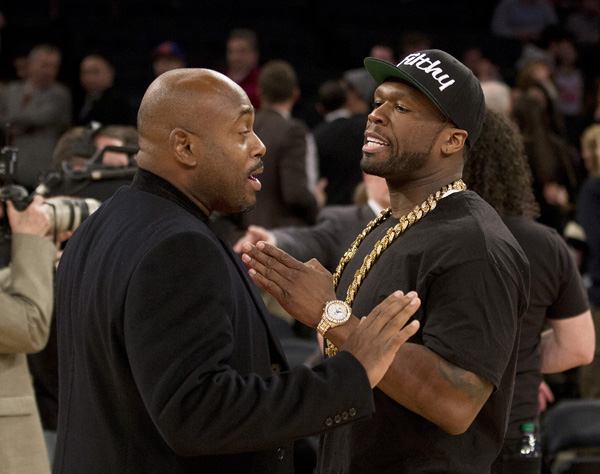 It comes as no surprise that 50 Cent hasn’t taken kindly to Steve Stoute’s recent criticism of the rapper in his interviews where he has been promoting his Tanning Of America documentary.

As we mentioned in our earlier post, Steve and 50 go way back to around 2000 when Steve was the Urban head of Sony/Columbia and 50 got dropped from his label after getting shot 9 times. 50 has often said in interviews that he doesn’t trust Steve anymore so he remains away from him. In the Hot 97 interview, Steve said that 50 isn’t an influential artist while in the Breakfast Club chat, the music mogul suggested that 50 should continue rapping about drugs and should thank him for his Reebok deal.

In the classic 50 Cent manner, the rapper was photographed confronting Steve at the Golden State Warriors vs. New York Knicks game at Madison Square Garden on Friday.

Another photo telling us the story is posted below. This is 50. Ha!

UPDATE: 50 Cent has uploaded a funny video where he is reenacting the incident with Steve at the Knicks game, comparing it with the elevator scene from the movie Juice where Bishop pulls a gun on Q in an elevator full of people.