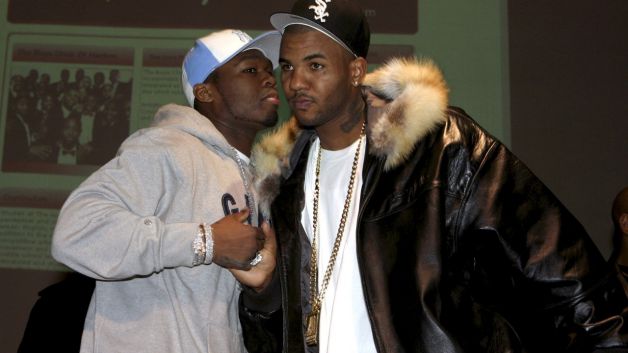 Are 50 Cent and The Game finally squashing their decade old beef?

We all thought this just wouldn’t happen ever but I guess never say never.

When 50 Cent brought The Game into the G-Unit picture with help from Dr. Dre in 2002, the two created an East Coast/West Coast connect that hadn’t been witnessed before in Rap music. They became the hottest rappers of the era which eventually led to a hugely successful debut from The Game with The Documentary.

The two soon fell out with each other after 50 Cent kicked out Game for not staying loyal to him and discrediting him for his contributions to hit records on The Documentary. A violent shootout between the two camps outside Hot 97 further escalated the beef and Game went on to create an anti G-Unit movement called “G-Unot”. Several diss records from both camps were thrown at each other, forcing majority of fans to pick a side in the beef.

In the past few years, things have cooled down a bit. Although Game has expressed his interest in getting back with his old crew several times, 50 has repeatedly said that he will never work with Game again. But between shouting out 50’s Effen Vodka, connecting with Lloyd Banks in Dubai and partying at the same Hollywood club with his rival recently without any issues, fans have been hoping for a miracle to happen.

Last night, DJ Drama shot the video for his latest single ‘Wishing’ with Chris Brown and others in L.A., and 50 Cent was also present, apparently making a cameo in the clip as can be seen from the Instagram post above. And it looks like The Game along with a few of his homies were also at the very same location, “The Hollywood Hills Residential”. His Blood Money Ent. signee Pharaoh Jackson did a couple of posts on Instagram from the same location — one photo with The Game while other being a clip from last year of Dr. Dre and The Game vibing in the studio to The Documentary 2 where Game mentions how him and 50 “broke up like The Beatles.”

The real deal of the post is however the caption which says that the two rivals are “joining forces again”. It also mentions that a Straight Outta Compton type movie could be in the works.

“The BEATLES AKA “G-UNIT” are joining forces again… “STRAIGHT OUTTA COMPTON” the movie captivated the Globe…. NOW what’s gone happen when we do the “G-UNIT” movie with all the drama… G-UNIT aka the Hip-Hop Beatles TOOK OVER THE WORLD, BUT EGOS CAUSED THEM TO BREAK UP PREMATURELY….”

Documentary 2 & 2.5 go download it on iTunes now…. @jellyrollville and my bro @losangelesconfidential killed it with this track…. The BEATLES AKA "G-UNIT" are joining forces again… "STRAIGHT OUTTA COMPTON" the movie captivated the Globe…. NOW what's gone happen when we do the "G-UNIT" movie with all the drama… G-UNIT aka the Hip-Hop Beatles TOOK OVER THE WORLD, BUT EGOS CAUSED THEM TO BREAK UP PREMATURELY…. #gunite#winnerscircle#bloodmoney#gunit#thegame#50cent#youngbuck#lloydbanks#tonyyayo#kiddkid#kingpharaoh#skemetheduke#wack100#gmajic#nujerzeydevil#john316official

We’d have to wait and watch how this pans out but it’s surely an interesting development. Our question to fans: do you care about a 50 Cent-The Game reunion at this point? Let us know in the comment section.