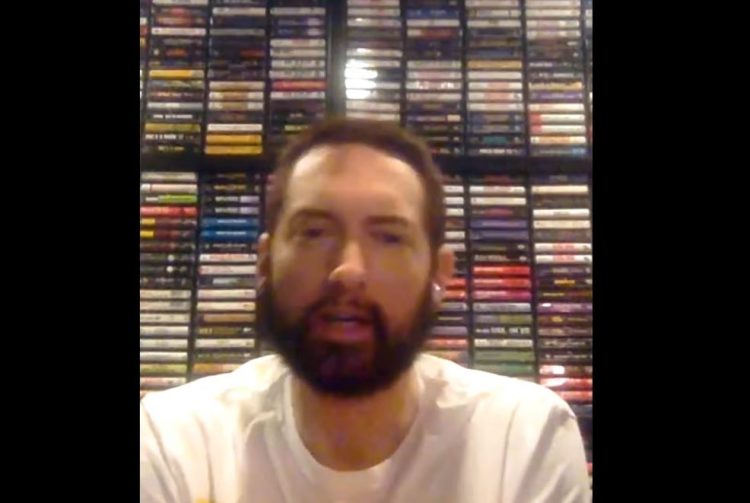 Eminem released the Side B / Deluxe edition of his latest album Music to Be Murdered By last Friday which managed to move 94k copies in the first week.

Slim Shady hasn’t done much promo for the album as expected but he did sit down for a chat with Zane Lowe on Apple Music for their “At Home With” series. Em ran through a selection of the music featured on his playlist and spoke elaborately about the golden age of hip hop and artists that influenced him like Run D.M.C, LL Cool J, Rakim and 3rd Bass.

He also talks about the GOAT rapper lists that fans usually like to debate about while naming his favorite rappers like Kendrick Lamar, J. Cole and Lil Wayne. Marshall spoke about Pete Davidson’s SNL parody of ‘Stan’ as well where he made a cameo, his passion for collecting cassette tapes, and more.

Em said he still doesn’t feel as influential as some of the other greats of Hip-Hop. “I know I’ve been around for a minute, but I don’t feel like honestly, in my heart of hearts, I don’t feel like anything I did, anything I’ve done up to this point is more influential than they were to their era. To me, I will never mean more than they meant to their era. And that, man, a lot of times people, when they ask me what my top favorite rappers are, I don’t even know how to answer that, because there’s so many rappers that have been so great and still are great. And by the way, I think Rakim probably is still great. I haven’t heard anything he’s working on lately, but I guarantee you he ain’t lost that sh-t, because that kind of sh-t don’t go away. It just doesn’t.”

He further states that the greatest rappers lists should be done according to each one’s era as Rap music has seen so many transitions. “I rap to be the best rapper, but I’m not the only rapper who raps to be the best rapper. Wayne, Cole, Kendrick, Joyner Lucas. They rap to be the best rapper, and I feel like when you push yourself like that, that’s what I feel like inspires greatness,” he said. “But the list, man, sometimes you almost have to go by era. Tupac, I feel like rappers like Rakim, G Rap, Kane, Treach, Phero Munch, Gwin, KRS-One would drive some new sh-t, it just outdid whatever was before that. And then along comes Rakim, and he out does that. And then along comes G Rap and he starts out doing everyone else. Redman, Redman was, to me, one of the most consistent artists. Still rapping to this day, is one of the most consistently dope rappers.”