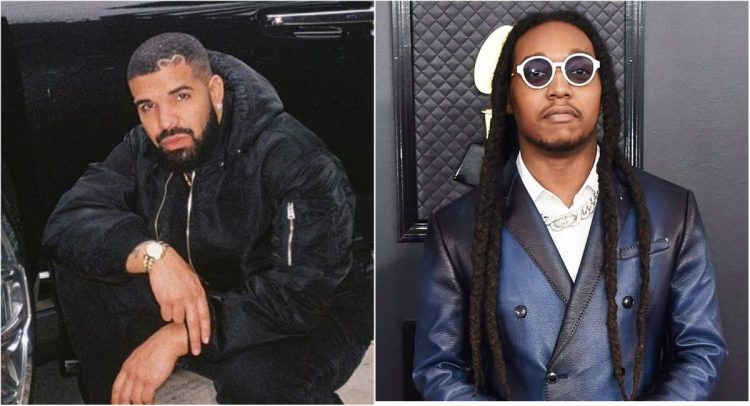 The music community worldwide is mourning the loss of Takeoff who was shot and killed in Houston last night.

Shots were fired at Takeoff apparently after an argument over a dice game at a bowling alley in Houston but the investigation is still ongoing and no arrests have been made yet. Migos’ label, Quality Control released a statement on his death shortly after the news, saying “It is with broken hearts and deep sadness that we mourn the loss of our beloved brother Kirsnick Khari Ball, known to the world as Takeoff.”

“Senseless violence and a stray bullet has taken another life from this world and we are devastated. Please respect his family and friends as we all continue to process this monumental loss.”

Takeoff’s lawyer, Drew Findling, also had a message following the rapper’s death, writing, “Takeoff was not only a brilliant musical artist with unlimited talent but also a uniquely kind and gentle soul. He will be greatly missed now and always.”

Drake, who was always a big fan of Migos, wrote a heartfelt message to mourn the unfortunate passing. Sharing a photo with Takeoff from their co-headlining Aubrey and the Three Migos Tour in 2018, he wrote: “Got the best memories of all of us seeing the world together and bringing light to every city we touch. That’s what I’ll focus on for now. rest easy space man.”

See below for some of the other reactions:

RIP Takeoff 💔💔💔
my heart is broken

This Takeoff shit so weird .. I’m genuinely creeped out by the world . I cried . God bless that man’s spirit his family and friends . SUCH A TALENTED SOUL .. ion understand

i had the honor of being on migos first mixtape back in like 09’…crazy what they’ve done since. i was so proud of that album cho and takeoff just dropped, the bars and production were so mean, i’m just glad he got to experience SOME of his flowers while he was here. RIP Take 🕊

This is heartbreaking news and a tragic loss to GA and the music industry. Born and raised in Gwinnett County, Kirshnik Khari Ball influenced Hip Hop and our Culture beyond measure.

My condolences are with Takeoff’s family, friends and all those who were inspired by his talent. https://t.co/5SI04LzTau