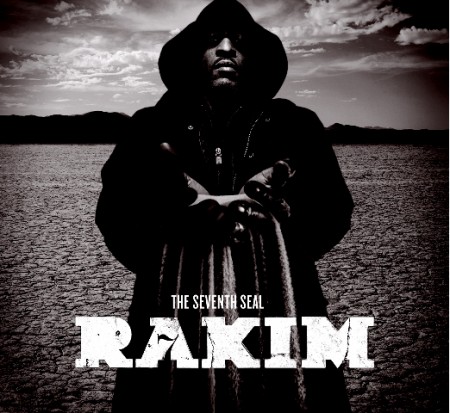 Eskay comes through with the final artwork for Rakim’s new album which has now been pushed back to November 17th. You can also have a look at the press release which is after the cut.

September 24, 2009 (New York, NY) –After months, if not years of Internet speculation and rumor, the man many call The God MC’s management and label officially confirm that Rakim Allah will release his long awaited new album The Seventh Seal on November 17, 2009. Guest artists include Busta Rhymes, Jadakiss, Maino, Tracey Horton, IQ, Styles P, and others, including Destiny Griffin, Rakim’s own daughter. The artist’s Ra Records shares the imprint in a joint venture with Tuscan Villa and SMC Recordings and is distributed through Fontana/Universal Music Group.

Since its release, the album’s lead single “Holy Are You” has won praise from critics and fans alike. USA Today states, “The God MC previews his long-awaited The Seventh Seal with a lyrically adept reminder of how he earned the name,” with Billboard proclaiming “Rakim is in top form, richly merging self-mythologizing reflections on his legacy with religious imagery.”

His first full album of new material in almost a decade, The Seventh Seal is Rakim’s contemporary observation of the Hip-Hop culture he helped define. While staying loyal to his New York roots, Rakim has created a body of work that encompasses the very best of regional, underground and mainstream styles that are reformed and delivered through his intricate lyricism and the seemingly effortless flow for which he is revered. He has enlisted a slew of production talent including Needlz, Nottz, Jake One, Nick Wiz, Ty Fiffe and more on the album’s well-rounded tracks.

The artist states, “The Seventh Seal is my own revelation…my way of taking the best of what Hip-Hop has to offer, what we as a culture and a community have to offer, putting my stamp on it and leading us forward while constantly respecting what we’ve already accomplished. When you’ve been blessed with a career like mine, you develop a deep relationship with the music, and that love is recognized by the true heads that share it with you. You’ll see us keep building as we break through each Seal…showing the best of what I can do in many forms, bringing the energy and having fun, but first I’m laying that foundation and give my longtime fans the conscious fire they expect.”