Usher Previews ‘Looking For Myself’ In NYC; Song Titles Revealed 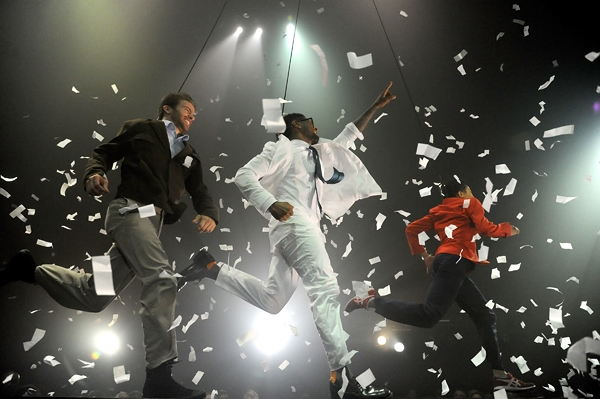 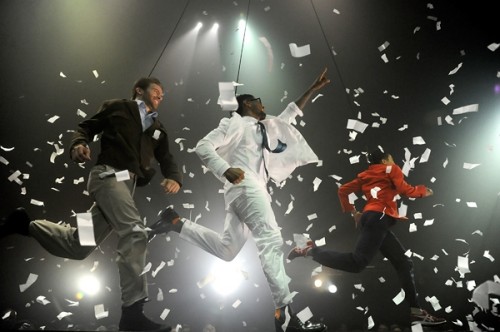 Usher converted his off-Broadway debut at Fuerza Bruta: Look Up last night in NYC into a listening session for his forthcoming album Looking For Myself which will hit stores on June 12th. The R&B star put up a eye catching show at NYC’s Daryl Roth Theater where he also performed a few of his tracks including ‘Scream‘, ‘Without You’ and ‘Climax’. The fantastic set had members of the Fuerza Bruta cast swimming on Plexiglass above the heads of the audience while the stage was occupied by strobe lights and booming speakers.

After the break, a description of 3 tracks from the album, ‘Let Me See’ feat. Rick Ross, ‘Dive’ and ‘I Care 4 U’ along with 7 other unheard song titles which were played for the audience.

“Lemme See” featuring Rick Ross
The song was coupled with the performance of a dream sequence where Usher was center stage on a broken-down bed, and a silver curtain enclosed the audience in a circle. As Usher was dreaming, two members of the Fuerza Bruta cast rolled, tumbled, ran, danced, and chased each other around to portray a lovers spat. “Lemme See” sounds like “Hot Toddy” 2.0 laced with the grunts and baritone voice of MMG’s head honcho, Rick Ross. “Lemme See” has the potential to define the summer of 2012.

“Dive”
This was the first ballad that was heard off of “Looking For Myself,” and it was appropriately coupled with the women of Fuerza Bruta performing choreography above the audience’s heads in a pool of water. The visual component gave the song a very sensual feel and also reassured fans that Usher has not completely fallen victim to Euro-pop.

“I Care 4 U”
The cast of Fuerza Bruta was still frolicking in water for “I Care 4 U,” but this time the audience watched a love triangle unfold. The most beautiful part about “I Care 4 U” is the tribal feel to the track that allowed the onlooker to get lost in an fantasy and feel like the Amazon was only a few steps away for four minutes.