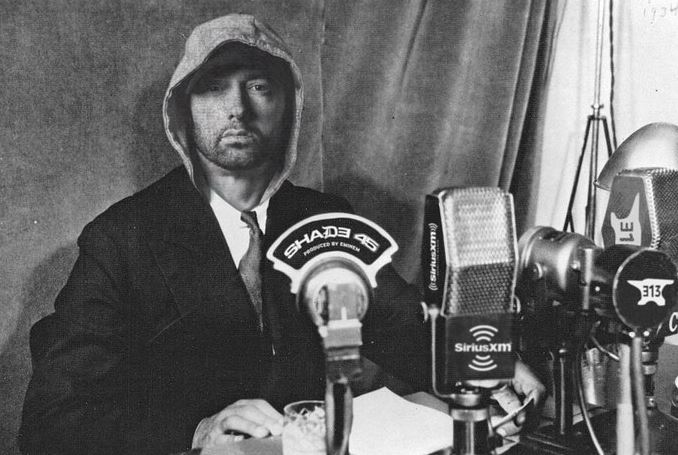 Eminem continues to do promo for his latest album Revival (see full booklet & production credits here). Fresh from a visit to his Mom’s Spaghetti pop-up store at the Shelter in Detroit — one of the venues that inspired the famous rap battle scenes in 8 Mile, Eminem did a “Fireside Chat” on Friday evening on his Shade45 channel (SiriusXM). He was accompanied by Paul Rosenberg.

Em answered all sorts of questions from fans and media about his new album, the creative process behind it, involvement of Dr. Dre and Mr. Porter, collaborating with Beyonce (Mr. Porter revealed yesterday that ‘Walk on Water’ was originally supposed to feature Adele), lack of rap features on the album and much more. You can listen to the full chat below. Here are some of the highlights from the chat:

On competing with other artists: “I’m into Kendrick’ music for sure, and Jay is a legend. So I always look to Jay to see what he’s gonna do next. Because it seems like, like he did when he put out 4:44, that everybody followed what he does. He puts out an album, and it seems like everybody follows him. Me, I’m just trying to compete with the best of the best that are out right now, and that doesn’t necessarily mean from my generation, it means from every generation. That’s what I want to compete with.”

On where Revival ranks in his catalog: “I try not to look at it that way, because I know that, in hindsight, looking back at albums like Relapse and Encore, I do feel like I could have did better. But I realize at the time, thinking back to it, that was the absolute best I could do at that point in time. I think I said this in a line before, ‘Encore’ I was on drugs, and ‘Relapse’ I was flushing them out. I was learning to rap again, basically. But every album, I always try to put my best foot forward, so hopefully that’s what I did.”

On his relationship with Dr. Dre: “It’s always the same with me and Dre. Over the years, we’ve really become close friends. I would never look at it any other than that. This album, the last year or so is when things started to connect, and I know Dre was taking a break, and I knew that he had taken some time off, so I couldn’t really hit him up for some beats, so I kind of just kept going with what I was doing and came to him when the album was pretty much almost finished. We had the discussion that if he didn’t do a beat on the album could he at least mix, because he’s not only the best beatmaker in the world, to me, but he’s also the best mixer. Hands down. I don’t know what he does on the boards, like how he does it, because I’ve stolen all his tricks, and I still can’t make it sound like he makes it sound. It’s incredible.”

On Dr.Dre helping him choose songs on the album: “I love to play my stuff for Dre because I’m gonna get an honest reaction every single time. And Dre’s going to tell me if something sucks. He’ll do it in his own way. He’ll be like, ‘Alright, where’s the fun at? I want to hear the fun, where’s the fun at,’ if I play him a bunch of serious tracks. You know, I can tell by his reaction. I actually threw out like three or four songs last time I was in Cali because they didn’t get the reaction from Dre. I know when he’s really into something.”

On Mr. Porter’s role on Revival: “This is the most that me and Mr. Porter have collaborated on an album since Infinite. He came in and he rounded up the troops. He got Emile (Haynie) and Mark Batson coming together and putting ideas together, as far as what beats to make, and I would take them in the next room and just start writing. Mr. Porter came at a time that I really needed to be fired up. I was making songs, but I don’t know if I was really serious about it.”

On his Revival collaborators: “The Alicia (Keys) thing was great because I got a chance to be in the studio with her, and we got a chance to actually collaborate, so that was super important. And I also feel like having somebody on a song like that, to me, just made it mean more. It just felt right to me. The Beyoncé thing was incredible, I didn’t think it ever could have happened. It was one of the things on my wish list, but I wasn’t sure if it could ever happen, and also I never really had the right song to bring her and present, so I’m super grateful that came together. The Ed Sheeran thing, one of the producers I work with, Emile (Haynie) did the beat, and he sent it to Ed, and they worked together in the studio and they came up with that hook, and I just heard what the hook was talking about and I wrote the song. And I’ve always looked at Pink as kind of a rebel, and I’ve told her that, I super respect her art and her music. And we’ve worked together in the past, so it only made sense for me to have her on that song.