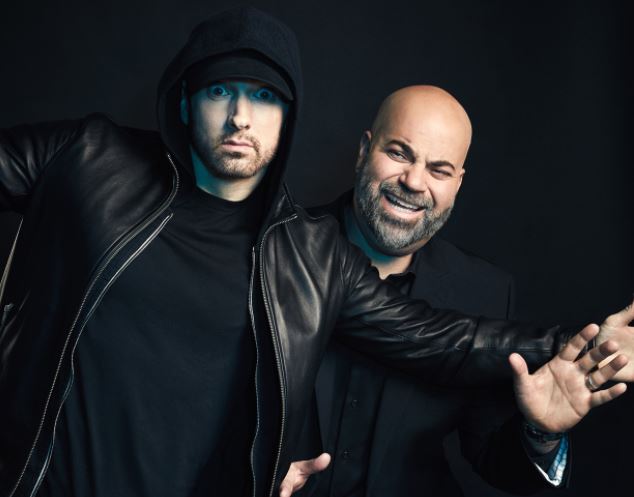 Eminem released his latest album Revival in December but the response was probably not what he would have expected. Shady addressed all the negative response and criticism on the ‘Chloraseptic’ remix featuring 2 Chainz and Phresher with lines like “Not as raw as I was, Walk on Water sucks’ — B*tch suck my d*ck, y’all saw the tracklist and had a fit, before you heard it so you formed a verdict.”

Em releasing a remix shortly after the album’s release was surprising of sorts and looks like more music in the near future won’t be far fetched idea. In a new interview with Billboard magazine, the rapper and his longtime manager Paul Rosenberg have discussed their two decade old friendship, being in business together, Paul’s new role as CEO of Def Jam Records, his future at Shady Records and more.

Regarding maintaining balance between his new job at Def Jam, being Eminem’s manager and co-owner of Shady Records, Paul said he will try to make it all work. “I have to figure out how to balance my job as a manager, my role with Marshall at Shady and the huge responsibility of Def Jam. If I figure out that balance, I think everything would be fine, because I’m confident that I can do the job. I just have to find the right mix of time, energy and focus to be able to do it all and still be a human and have a family.”

When asked what goals he has this year, Eminem said he isn’t sure as he’s still in “writer mode.” “I don’t know what that answer is for me right now. I’m still in writer mode,” revealed Em, hinting that there is a chance we might hear more music from him this year. Mike WiLL Made It recently revealed that he visited Eminem and Dr.Dre to drop some new beats so let’s hope something is coming soon.