Kanye West Reaffirms Support for Trump at Sunday Service: “Never made a decision based on my color” 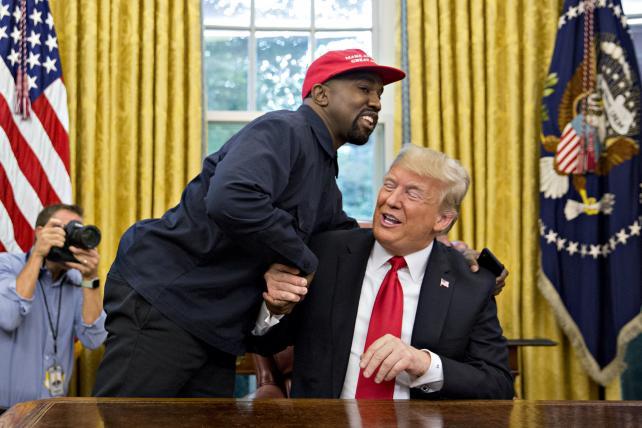 Kanye West has reminded fans that he still strongly supports Donald Trump and the Republican party, just in case they forgot.

The rap mogul brought his Sunday Service to Salt Lake City, Utah on Sunday and during the event, defended his friend again. He said he’s never made a decision based on his skin color and so he won’t be doing that when it comes to his support for a political party and the President.

“That’s the Republican party that freed the slaves,” Kanye says in a video clip shared reporter Hunter Schwarz. “People wanna call me a coon ’cause I chose my right. And we got the right, right? We got a right to our opinions, right? You Black, so you can’t like Trump. I ain’t never made a decision based on my color. That’s a form of slavery, mental slavery.”

Kanye West At Sunday Service Salt Lake City talked about the Republican Party of Lincoln freeing the slaves and how he supports Trump: “I ain’t never made a decision only based on my color. That’s a form of slavery, mental slavery.” pic.twitter.com/0Cwom01ipF

Watch the clip above. Kanye was trying to point to the fact that former Republican President Abraham Lincoln was the one in office when slavery in the United States ended with the Emancipation Proclamation. The event was attended by approximately 7,000 to 10,000 people.

‘Ye is set to release his new album Jesus is King soon, although the fans have been disappointed with constant delays. An accompanying film of the same name arrives on October 25 via IMAX.