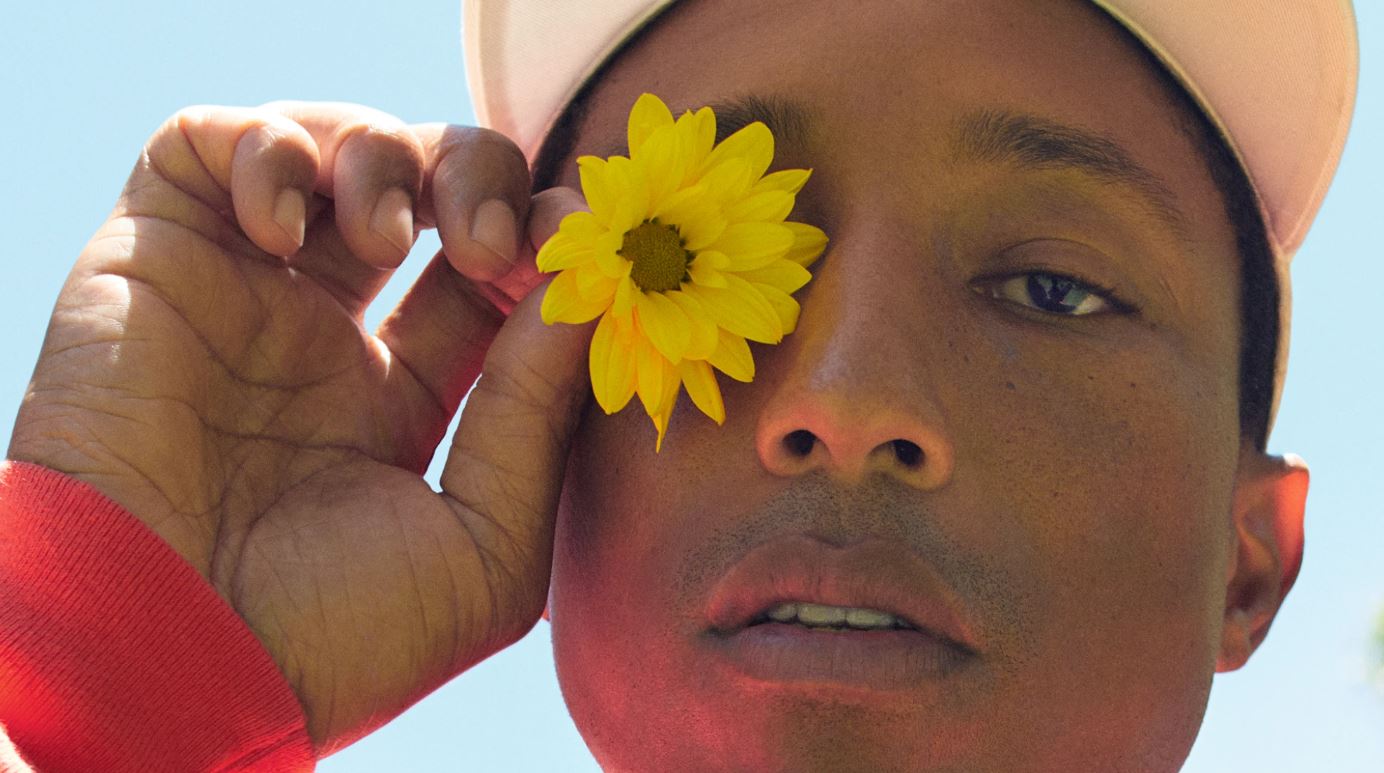 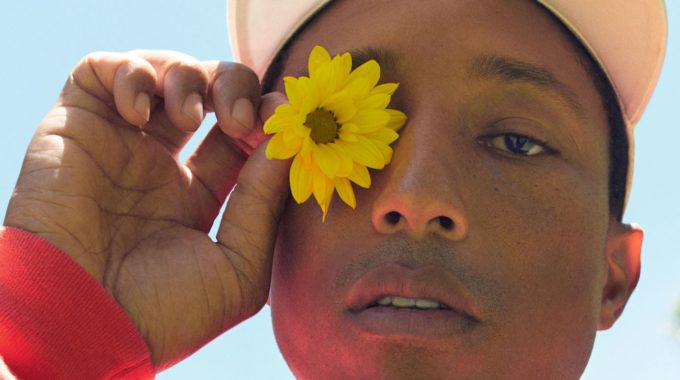 Pharrell Williams is on the cover of latest issue of i-D magazine, billed The Faith In Chaos Issue for Summer 2020.

To our surprise, it’s none other than Kanye West who interviews Pharrell (in Miami at the time of interview) over the phone from Wyoming. The two iconic musicians have a frank chat about the present situation with Coronavirus, how it’s going to change how we live & behave, the role of artists, what Kanye is building in Wyoming, and much more.

What’s interesting is that Kanye ends up talking much more here than Pharrell but it’s always fascinating to see where ‘Ye’s mind is these days. Below are some excerpts (the bold text is Kanye speaking).

I think back to when I was growing up, living in Chicago and all my friends are gangbangers, and then I’d go to the suburbs in the summertime and I’d be known as ‘the black kid’. And at that moment it’s like I related more to what Pharrell was saying in the midst of all the gangsta rap… Oh another thing I wanted to point out, I know I’m going off here, but I want to talk about Virginia and how important Virginia is to black music. People talk about the importance of Detroit, but modern black music is Virginia! From Teddy to Pharrell to Timbaland, and what’s my man from Jodeci? DeVante! Broooo! I cannot even put into words what those gospel chords do to me. They rip me out. And then Pharrell took a punk approach to gospel chords. Pharrell is punk. That’s what that is. When you started using live drums. That moment. Man, you’re one of the best.

Wow. That was quite a compliment, I mean… I’m speechless. But I wasn’t alone, you know? There were so many of us, whether people know us by name or not. And we all realised there were far more archetypes available to us than the media was allowing at that time. We were just like, ‘What about us?’ We’re not in one particular box. We happen to be pluralist. I see you continuing to do the same thing. You’re really the real thing. The real thing. I mean that. You can create something that you’ve seen so clearly in your mind. I think that is essentially the promise of all human experience. Everyone has the ability to tap into that, but some people seem to instinctively already know that innately. I think it’s up to people like yourself, who were gifted with that ability, to remind people that the human spirit is big – and that we meet in flesh, but we also meet in spirit.

So this is the Faith In Chaos Issue of i-D. What shall we talk about now? Creativity? Coronavirus?

I think we need to be clear that this is a plague we’re living through at the moment. I don’t think there will be such a thing as a new normal – it doesn’t do enough justice to the difference in who we were pre-pandemic and who we will be moving forward. I think it’s made a lot of people very wary and on edge. Life’s going to have a different kind of gravity than it’s ever had before. It’s also gonna make us really separated. We’re disconnecting from each other even though online we’re probably more connected than we’ve ever been. It’s a bit like the Tower of Babel, if you will. We’ve never been this close, and there’s a lot of advantages that come with that. There’s a lot of disadvantages, too, and a lot of grey areas.

But I also know that love is going to be a very deep emotion. Something people really feel you know. You can’t just shake a hand or hug a person and exchange that feeling in a way you could before. And then, look at things economically, regardless of whatever ways stabilisation reveals itself – not normality, but stabilisation – because like a wave it’s gotta stabilise at some point, and when that does, there’s nothing normal about looking around and seeing so many businesses closed and so many people without jobs. But we have been through many plagues before. We have been through pandemics. We survived. We’re gonna make it. In a lot of ways we got ourselves into this, we gotta get to work to get through it. 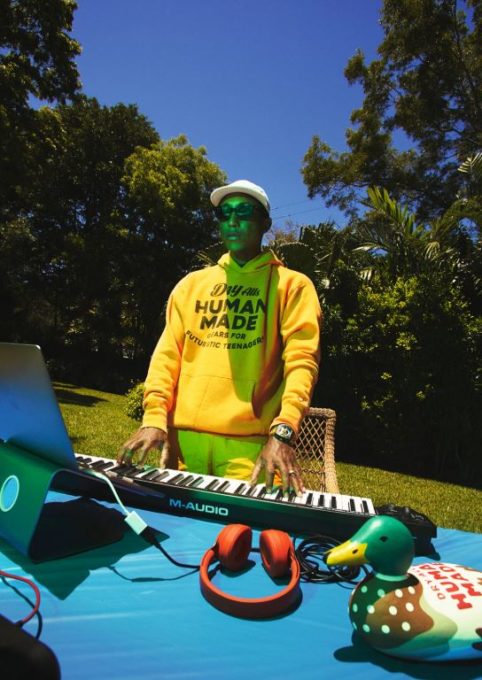 I was sitting here with my manager Bu, and we were talking about how people want to come to America and how amazing the country of America is. Then we got on the concept of what it meant to be poor in America, and then I started the sentence and I said, “When you’re poor in Africa…” and before the sentence was finished, Bu interjected and said, “You’re better off there than in America, because if you’re in Africa, the community won’t let you go hungry.” That’s the type of mentality that we’ve gotta apply moving forward [after] this pandemic. That’s the change that must happen.

We need to understand humanity as one species. We need to change our mentality, readjust our mindset and use that readjusted mindset to change the world. The only thing that can change the world is people changing. And we have this moment right now to just really reset because the world wasn’t heading in the right direction. Everything is up to God and we have this opportunity to collectively feel, to be saved and answered, to collectively think about what is happening really. We have this time to pause and reflect, to ask each other how we’re really feeling. What are we feeling? What am I feeling? What are you feeling? And then we need to ask what we’re thinking, and the deepest level is knowing. That gut feeling.

I believe that things can be simplified. We’re over inundated with everything and now we have the opportunity to readjust and focus on the essential and the simple things.

Last summer I was building these homeless shelters, and a lot of the times when people build homeless shelters they build it like, ‘oh it’s for the homeless,’ whatever, but I want to build something with taste, an actual home. And people start to say, well what about the drugs, or the mental health problems. Take a gated community, I believe the drug and mental health problems there are equal to the drug and mental health problems of the homeless. The idea was to make a space that was also going to inspire, and in a place that I would live in, so I called it the T-shirt of homes because a billionaire can have a T-shirt and a homeless person can have a T-shirt.

We had to go where we could build it. We studied communal living in Africa, we studied organic farming, we studied solar energy. This is one of the opportunities we have right now. We’re learning how to build a city. You can go to a tattoo artist, and they have the worst tattoos in the world, but they’re the best artist. Why? Because they practised on themselves. Like if you take a lot of my media from the last past 20 years, well I was practising on myself.