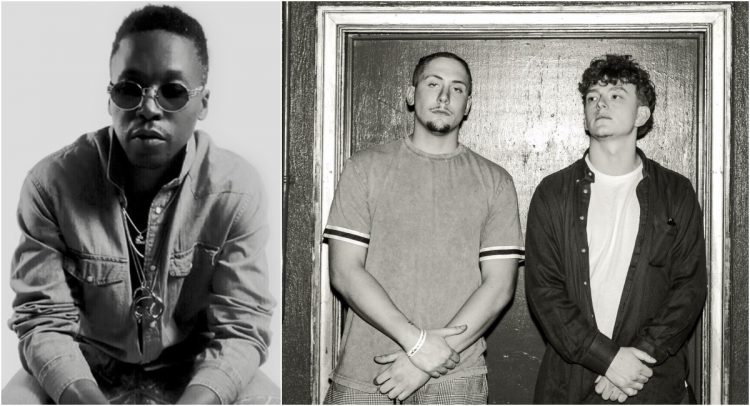 Lupe Fiasco is a top tier lyricist and arguably one of the best to ever touch the mic. He also makes sure he has an eye on some of the emerging talent in the industry but till now, he has not done business with too many on the label side.

Today, Lupe is changing that by announcing new signees to his 1st and 15th Entertainment label: TDK aka Two Depressed Kids. The duo made of Jake and Drew and hailing from Lupe’s hometown of Chicago, was supposed to be on the road with him on his 2020 Food and Liquor tour, which ended up getting postponed due to the pandemic. TDK have not officially released any music so far but HHNM is premiering their first official single ‘Check’ today.

It’s a bouncy track produced by Wiz Buchanan and represents a modern Trap sound that most fans will be surprised to hear from artists signed to Lupe. It’s taken from their forthcoming 6-song EP — listen to the HHNM premiere below. “Excited to bring TDK into the FNF family!” Lupe said to HHNM. “Catch them next year opening on my rescheduled tour dates. Full EP in the works but this debut track goes hard. Keep an eye on these guys.”

We also chopped it up with Two Depressed Kids about the song, signing with Lupe and more.

Can you tell us a bit about yourselves since there isn’t much info online.

Well our names are Jake and Drew and we go by TDK (Two Depressed Kids). We met each other in grade school when we were about 9 years old and then started to make music and formed the group TDK in our junior year of high school. In our younger years, we both had some struggles family wise, Jake mostly with his parents being separated and not on good terms and I (Drew) didn’t know my biological father and had to move a lot as a kid. During high school we both pretty much stuck to ourselves (more of the loner/stoner types), played sports, and worked on writing verses for fun and just going on drives so we could freestyle and smoke. After high school we both went to college for a while. Jake went to the University of Iowa and I went to Western Illinois University. I only attended for a little under a full school year and was kicked out due to poor grades. Jake attended the University of Iowa for a year and a half and then came home from school after getting mono and falling off track with school. At that time, I was kicked out of my house and had to go live with my grandparents and work at a factory for about 9 months while continuing to write music. It was at this time that Jake and I started to think that we should go to a studio to record our music, and after a little convincing from our friends we ended up going to 1st and 15th studios. Jake and I then moved in together and started taking music way more serious, and after just 3 studio sessions we ended up meeting our now Manager KD. We were then offered the opportunity to sign with 1st and 15th so we did! After that, the hard work started to really kick in and we just started going to the studio as often as possibly for the past year and a half.

The first single ‘Check’ is an interesting listen. Is it a good indication of the type of music you two make?

To be honest, it is and it isn’t at the same time. We love to make fun dance/club music, but we also make a lot more serious music too. We think people will be surprised and fall in love with the music we will be putting out in the future. In a lot of ways it will be nostalgic and have a classic sound we all know and love but with our own hip hop twist on it. We’re very excited to show people what we are capable of musically and can’t wait for everyone to hear it!

How did you connect with Lupe and end up signing with his 1st and 15th Entertainment label?

After we met KD at 1st and 15th studio, and started to work under the label, we got to fly out to Seattle to meet Lupe and watch him open up for Nas at his Illmatic anniversary show.

Does he offer you his inputs with your music and business advice?

As of now he has not, but we can’t wait to be able to get in the studio with him and watch a lifelong idol of ours do his thing. Although he hasn’t given us any advice face to face, he has taught us a lot through his music as we grew up listening to Lupe. Watching his old interviews and seeing him perform live has also taught us a lot such as how to carry ourselves as artists and more than anything how to stay humble and true to yourself.