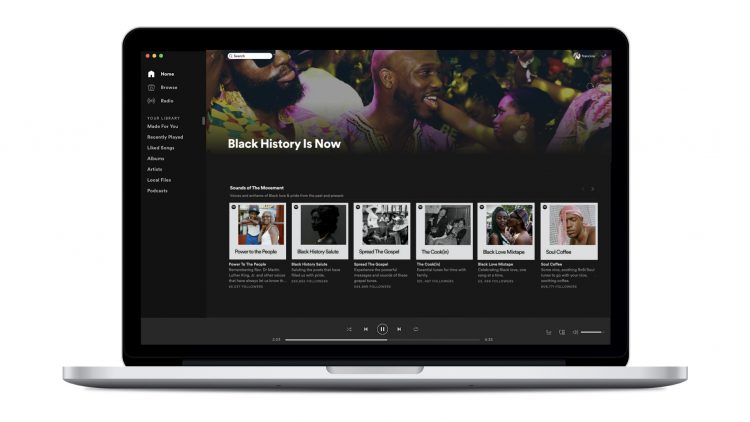 Spotify is celebrating Black History Month in a big way. The leading streaming service has announced a bunch of few initiatives, playlists and special curated material in honor of February.

Fans of the genre will be able to experience a 24-hour homepage takeover of exclusive hip-hop playlists. The homepage takeover will reach hip-hop fans around the world, with the US, Canada, UK, Australia, New Zealand, The Netherlands, Belgium, Germany, Sweden, Norway, Denmark, and Japan taking part.

Additionally, Spotify has announced the launch of four new playlists dedicated to Hip Hop which should give fans an even wider choice while exploring new sounds within the genre.

New Joints: These are the newest rap songs our editors think fans should know. The hip-hop version of New Music Friday.

Trophy Room: This mood-based playlist is for anyone who’s feeling celebratory.

City To City: This playlist features songs from the Drill scenes of New York, London, and Chicago.

Many of Spotify’s playlists, which can be found in the Black History Is Now hub, will be guest curated by influential Black curators, celebrities, creatives and more. Here’s a list below.

Black Lives Matter: American Jazz artist, Keyon Harrold Sr. and his son, Keyon Harrold Jr., who  are no strangers to speaking out against injustice are now using the power of music to further the conversation by taking over this playlist in partnership with the organization, Color of Change.

I Love My HBCU: Celebrate the institutions that educate and uplift as 2Chainz guest curates the popular playlist complete with homecoming anthems.

Black to the Future: Spotify features and supports up-and-coming Black artists including Amaarae, who will help capture Afrofuturism—in all its wild, otherworldly musical dimensions—by guest curating the playlist.

New Looks and renaming of Playlists:

Three Spotify playlists will be displaying their new looks and sounds today:

Westside Story: Formerly of the moniker “Cali Fire,” this playlist has expanded its scope beyond California to cover the entirety of the West Coast.

No Cap: Previously called “The Realest Down South,” this mix features Southern artists, old and new.

Out The Mud: “Off The Strength” fans can now find street artists on this refreshed playlist.

In addition, Spotify has launched some new initiatives with podcasts which includes a fresh podcast by acclaimed writer and author, Danyel Smith called Black Girl Songbook. “In a new Music + Talk show, join Danyel Smith as she celebrates and uplifts the talents of Black Women in the music industry. Listen as she shares music and discusses the stories of Black songwriters, producers, executives and more, celebrating the musical creativity and genius of Black women first,” says the description. A trailer is available now while the full series launches on February 4.

“We are excited to launch these news playlists as they are rooted in how our listeners engage on the platform. Hip-Hop moves at a fast pace and our team is constantly re-evaluating the landscape and keeping our eye on new trends, sounds, and scenes to serve our audience,” said Carl Chery, Spotify’s Head of Urban.

Fans can tune into everything newly announced on this link.