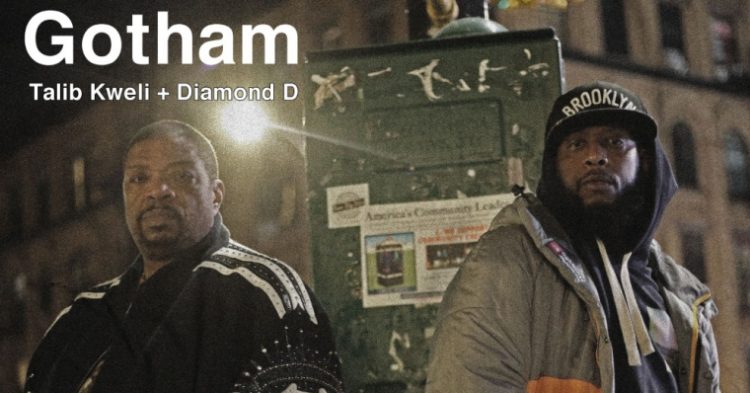 It was quietly announced earlier this year that Talib Kweli and Diamond D have formed a duo named Gotham.

“One of the first well-known producers to ever show me love in this music business was the legend Diamond D. I was raised on his music, from his solo work to the incredible contributions he’s made on the albums of others like Big L, Yasiin Bey, A Tribe Called Quest, Fat Joe, Fugees and many others. As a Bronx native, his sound represents the best, most original hip-hop in the world, New York City” Talib said of the duo formation.

“My city, in the DC Universe, Gotham, is located somewhere in New Jersey. But in real life, the Gotham from the Batman comics is 100% based in New York City. New York City was nicknamed Gotham before Batman was created, and this Gotham project is dedicated to Old New York. This documentation is necessary, especially in these pandemic lockdown times. The great cities of the world will never be the same after what we are currently experiencing. It’s the duty of those who actually lived it to tell these stories. New York will never not be great, but the New York we are talking about in Gotham is not for everybody. If it’s for you, then you are down by law,” he continued.

Talib Kweli & Diamond D Are Gotham are sharing a new single today, ‘The Quiet One’ featuring another veteran, Busta Rhymes. The album is set to feature additional collaborations with Skyzoo, John Forte, NIKO IS and Nire’ Alldai and will be released on April 16th. Listen to the song and peep the official tracklist, below. You can pre-order the album here.