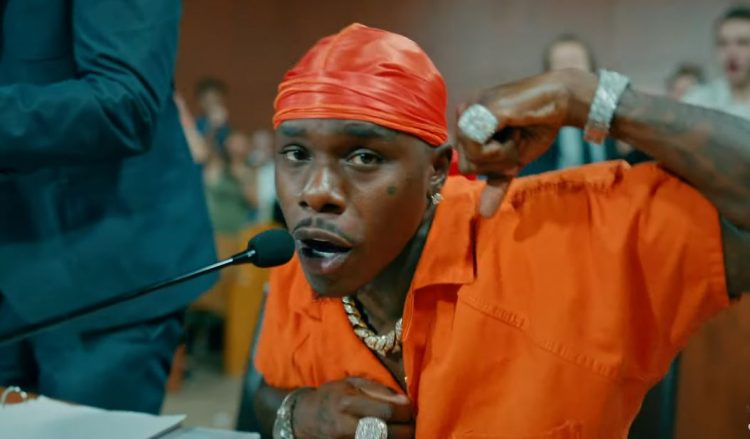 DaBaby is in the middle of a storm after homophobic comments made at the Rolling Loud festival this past weekend in Miami but he’s not letting that stop his flow of music. Today, he drops a new song and video ‘Giving What It’s Supposed To Give’.

At the fest, the rapper encouraged the audience to put their cell phone flashlights in the air if they “didn’t show up today with HIV/AIDS or any of them deadly sexually transmitted diseases that will make you die in two to three weeks,” among further remarks about HIV/AIDS and LGBTQ+ people.

DaBaby tried to defend his comments on Instagram Live but continued to make offensive statements. He claimed that his interaction with the crowd in getting them to put up their phone flashlights was not a homophobic rant but “a call to action.” He added that his gay fans “don’t got f**king AIDS” because they aren’t “nasty” or “junkies.”

He later suggested through tweets that his comments had been “digested” wrong. “Anybody who done ever been effected by AIDS/HIV y’all got the right to be upset,” DaBaby wrote. “What I said was insensitive even though I have no intentions on offending anybody. So my apologies. But the LGBT community… I ain’t trippin on y’all, do you. Y’all business is y’all business.”

He continued: “I tell fans to put a cellphone light in the air [and] y’all start a million man March. I told you y’all digested that wrong but I ain’t gone lie I’m impressed. Now show this same amount of support when a racist cop kill one of our black ass…YA NOT.”

Anybody who done ever been effected by AIDS/HIV y’all got the right to be upset, what I said was insensitive even though I have no intentions on offending anybody. So my apologies 🙏🏾

On Tuesday, singer Dua Lipa, who collaborated with the rapper on the smash hit ‘Levitating‘, also responded to the comments made by him. She wrote on her Instagram story that she is “surprised and horrified at DaBaby’s comments.”

“I really don’t recognize this as the person I worked with,” Lipa continued. “I know my fans know where my heart lies and that I stand 100% with the LGBTQ community. We need to come together to fight the stigma and ignorance around HIV/AIDS.”

DaBaby continues to drops new music as he returns today with ‘Giving What It’s Supposed To Give’ along with a music video which he directed himself. Watch it below.