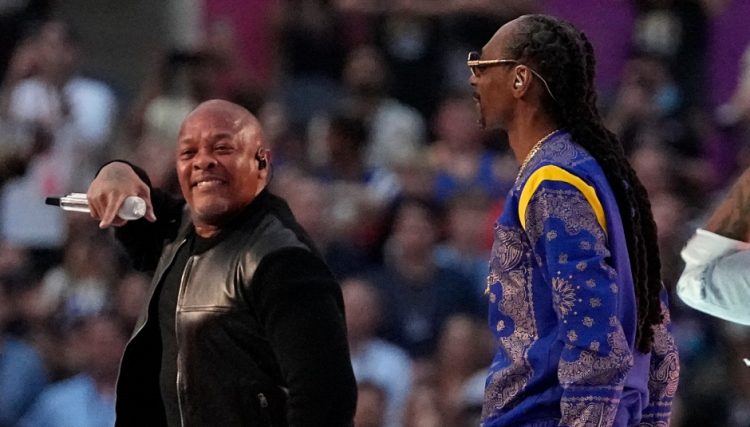 The Super Bowl halftime show finally accepted hip hop with open arms and it was a sight worth waiting for.

Dr. Dre presided over one hell of a show, rocking the mic and boards alongside Snoop Dogg, Eminem, Mary J. Blige & Kendrick Lamar, and surprise guests, 50 Cent and Anderson .Paak on drums. The music rocked the SoFi Stadium in Inglewood hard for the halftime show in a battle between the Los Angeles Rams and the Cincinnati Bengals. You can watch a re-run of the show here if you missed it.

Just in: some Spotify stats after the #HalfTimeShow:

As expected, a big jump in traction on Spotify happened following the epic show, with overall Dr. Dre streams increasing by a whopping 185% across the platform. His other songs performed at the event, ‘The Next Episode’ and ‘Still D.R.E.’ had an increase of 270% and 245%, respectively.

Mary J. Blige was expected to perform the Dr. Dre produced hit ‘Family Affair’ but ‘No More Drama’ being a part of the set surprised some viewers. The song’s streams increased by 520% on the DSP following the performance. Kendrick Lamar’s black protest anthem ‘Alright’ from his sophomore album To Pimp a Butterfly had a jump of 250%.

Spotify’s Gold School playlist featuring songs from the 5 performers at the Halftime show saw some healthy traction for obvious reasons.