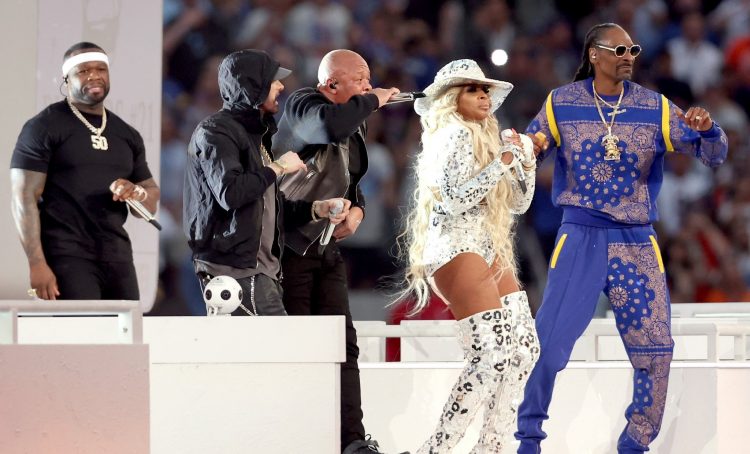 As expected, the Super Bowl halftime show turned out as legendary was it was promising to be.

When it was announced late last year that Dr. Dre, Snoop Dogg, Eminem, Mary J. Blige and Kendrick Lamar were coming together to perform at this year’s Pepsi Super Bowl LVI Halftime Show at L.A.’s SoFi Stadium, the hip hop fans were super excited and didn’t know what exactly to expect. But Dre the mastermind came and delivered. Along with the surprises.

Dre and Snoop Dogg first kicked off the massive set made of trailers and cars with the classics ‘Next Episode’ and ‘California Love’ before the biggest surprise came in the form of 50 Cent popping out of nowhere (even though there were reports of him making a guest appearance) to perform ‘In Da Club’ in the style reminiscent of the actual music video. Mary J. Blige the queen then commanded the stage alone to belt out her songs ‘Family Affair’ and ‘No More Drama’ with some solid vocals.

Following MJB, it was Kendrick Lamar’s turn to do his thing and make a return to the stage for a while with ‘Alright’. Eminem held the climax with his worldwide anthem ‘Lose Yourself’ before taking a knee, shocking the audience. Anderson .Paak joined Em on the drums which marked another surprise before Dre closed it all with some keys to ‘Still D.R.E.’. Watch it all happen below. This might be one of the greatest halftime performances.