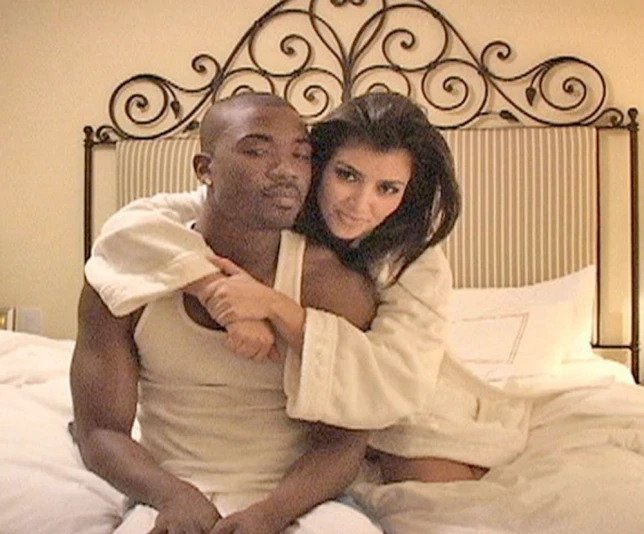 It seems like the Ray J and Kim Kardashian sex tape saga is never ending.

Ray J has done a new interview with Daily Mail where he has opened up about the controversy surrounding an alleged second tape between the two former lovers. The Love & Hip Hop Hollywood alum says that the Kardashian-Jenner family’s new reality show, The Kardashians was portraying him in bad light. The Hulu series covered the topic of a second sex tape, showing Kanye delivering a laptop to Kim which housed the film.

“I have never leaked a sex tape in my life. It’s always been a deal and a partnership between Kris Jenner and Kim and me and we’ve always been partners since the beginning of this thing,” he told the Daily Mail about their first tape which was released by Vivid Entertainment.

Ray J said the idea of releasing the first tape came about after a joke he made to Kim about potentially releasing it. “That’s how it all came about,” he claimed. “Once I pitched the idea to her, just playing around a little bit, that’s when she jumped on the idea, talked to her mom and it was out of my hands from there.”

In September 2021, Ray J’s former manager Wack 100 claimed that he had another tape in his possession but would be willing to hand it over to Kanye West. Ray J says a second tape does exist but he never had it in his possession.

“She kept them all,” the 41-year-old said to Daily Mail. “I never had a tape in my possession in our whole relationship. … She’s always had all the tapes in a Nike shoe box under her bed. I’m sure she has bigger beds now and better boxes. That’s how it all came about. Once I pitched the idea to her, just playing around a little bit, that’s when she jumped on the idea, talked to her mom and it was out of my hands from there.”

“Now I realize this is another promo stunt for you — unless you reach out to me soon I’m gonna take it to the level where it shows all of what we did,” Ray J wrote in the DMs with Kim, per the screenshots. “All of the meetings and convos about the plan — date and times of our meetings and the whole lie you and Kris planned this since the beginning.

“This is not a threat — You’ve taken this this too far — You know what we did!” he continued. “Your mom controlled this whole sex tape deal with [redacted] and [redacted] — it was her idea to put out the [tape].”

Ray J said that he had a laptop that contained intimate photos from their relationship, and he met with Kanye at a private terminal of LAX to talk about it. Kanye viewed the contents of the laptop, took it and left. In the episode, Kim said there was no sexual content in the clips — it was just a video of them dining at a restaurant. 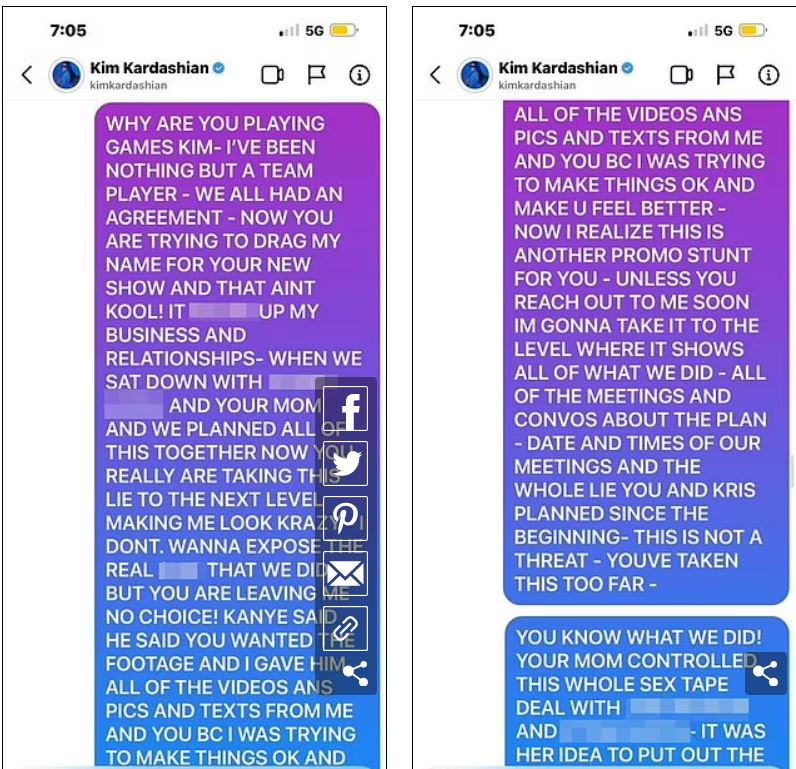 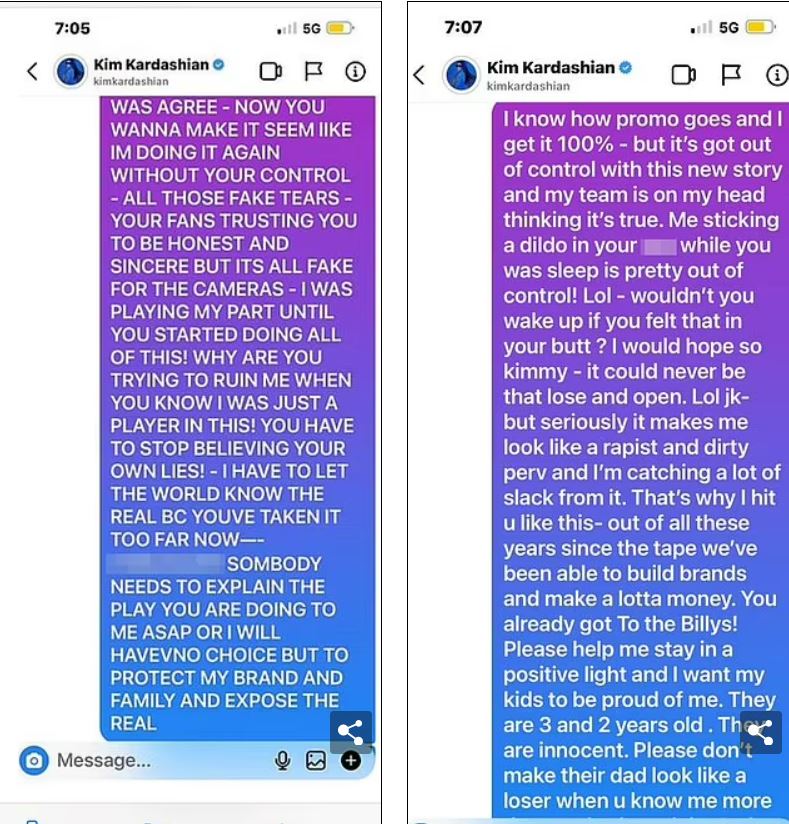 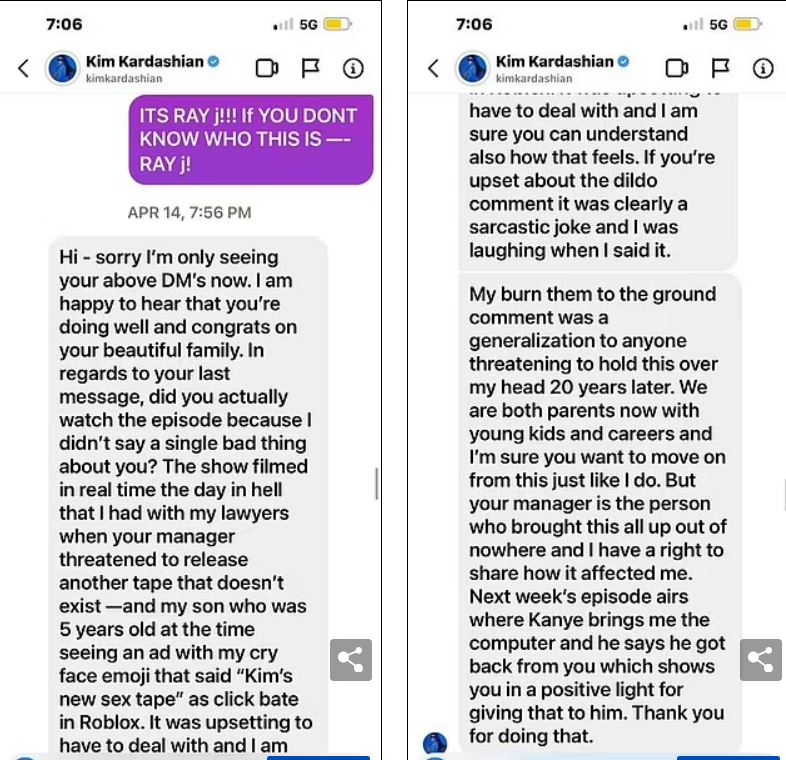 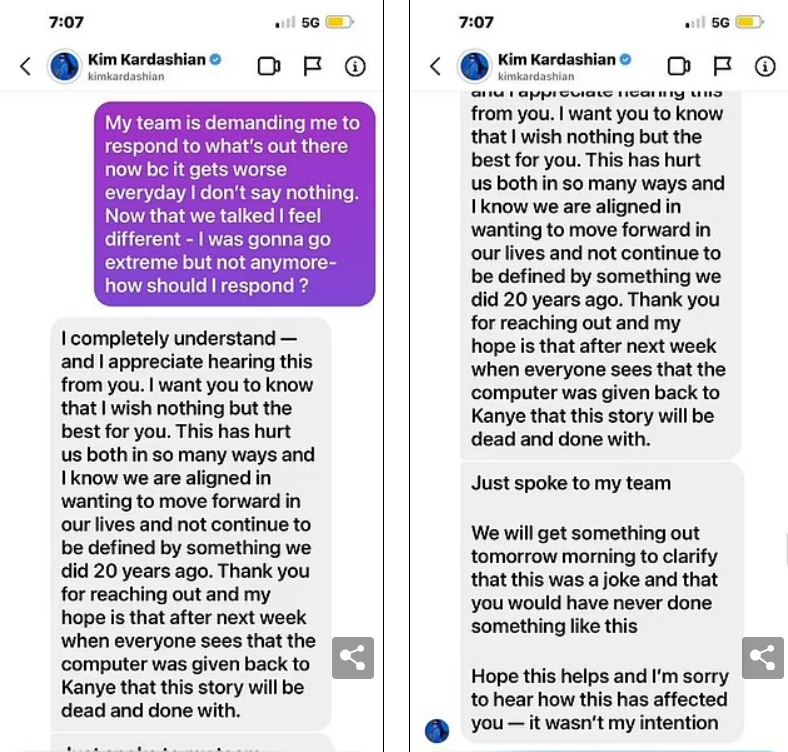 “Please help me stay in a positive light and I want my kids to be proud of me. They are 3 and 2 years old. They are innocent,” he said in the messages to Kim. “Please don’t make their dad look like a loser when u know me more.”

“I completely understand — and I appreciate hearing this from you,” Kim appears to have written in response. “I want you to know that I wish nothing but the best for you. This has hurt us both in so many ways and I know we are aligned in wanting to move forward in our lives and not continue to be defined by something we did 20 years ago. Thank you for reaching out and my hope is that after next week when everyone sees that the computer was given back to Kanye that this story will be dead and done with.”

She added, “I’m sorry to hear how this has affected you — it wasn’t my intention.”