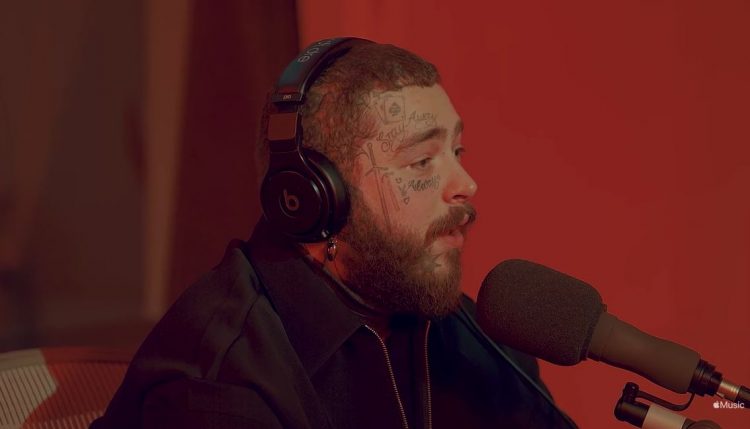 Post Malone is set to release his new album Twelve Carat Toothache on June 3rd which is led by the single ‘Cooped Up‘ featuring Roddy Ricch and ‘One Right Now‘ with The Weeknd.

Last week, he shared the official tracklist for the album featuring 14 songs and collaborations with Gunna, Doja Cat, Fleet Foxes and The Kid Laroi. The singer has now done an extensive interview with Zane Lowe on Apple Music where he discusses the making of the album, some of the features, being excited about becoming a dad soon, not being a fan of social media, writer’s block, and more.

“I just think it’s my personal opinion and the changes that I’ve made mentally to distance myself from that — that’s really impacted my life in a positive way. It’s just whatever makes you comfortable because at the end of the day, you just got to be comfortable with what you’re doing. And social media is something that I’m not super comfortable with,” he said about being away from social media as much as he can.

The superstar said he felt writer’s block for a long time and wasn’t being able to come up with something good. “Except working with Lou, whenever I’m in Utah, I have to find a way to entertain myself. So I have to try and make beats and write songs on the guitar and everything. And it was so hard because there was nothing there. I was, “Oh my God, I’ve already played that.” None of the sounds were right,” he commented.

“I was, “Let me download every sound library. Let me find everything. Let me sit on citrus and crank a knob to the right and see if that changes anything. But nothing came. And I was, “Uh.” Because I can’t play piano for sh*t. So every time I went to go pull something up on the piano role, I dragged a note to the same spot every time. And I was, “Oh man, this sucks. This sounds exactly the same as the beat I made five seconds ago.”

Post said he’s excited about upcoming fatherhood but is worried about the world we like in today. “I am terrified. I’m terrified. There is this sense of impending apocalypse, especially here in LA. In Utah, I’m like, okay, whatever you want. I’m ready to go. I’m ready to rock. I got food. I got everything else I need…. I have food for 25 years. I guess now prepping, no matter what happens, take care of my family. That’s the most important thing. Be able to take care of people who need it, move a little bit out, have a spot where you’re able to go. And I don’t know exactly what’s going to happen, but it’s just a crazy, crazy, crazy time. In LA I step outside and I hear a noise and I’m like, what was that noise? Dude, especially out here, I don’t know. The world is hot. It’s very hot. There’s disease. There’s people trying to hurt each other over nothing. I don’t know. It’s a crazy world and it’s a crazy place to raise a kid. I think any parent would agree.”