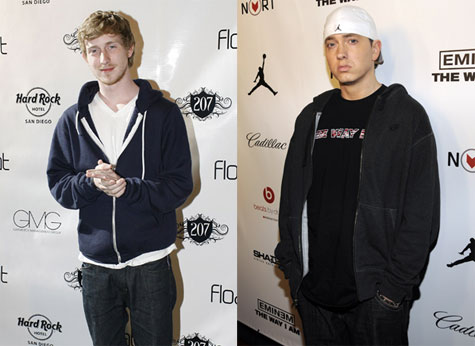 “Asher Roth, I haven’t had a chance to, like, really get into everything, like, really get into what he’s about, because I’ve only hear a couple songs. There was talk about people saying he sounded like me, and he was doing this and that and, you know, trying to take what I do and do it. You know, shit like that. I’ve heard things. But the stuff that I’ve heard from him honestly, which certainly isn’t enough for me to make my own opinion and say, ‘Yeah, he does sound like me’ or ‘No, he doesn’t.’ But the couple of songs I’ve head, I don’t really think he does. You know what I mean? He’s doing his own thing. I can respect it, too, because at the end of the day, I think he’s dope.”

I’ve heard a lot of people say they think Asher is better than Eminem, based on the 2 singles Em dropped recently. How foolish can you be for saying that ? I personally dont like We Made You but how can you say 3 AM is wack? It’s certainly a dope product, dark, sardonic with some crazy rhyme patterns. Not that I dont like the kid Asher, but he surely hasn’t achieved what Em has. I’m quite happy with 3 AM after a few listens, also, I wasn’t quite bothered by his accent(which is quite QUITE different from what he had on We Made You). Listen to the music before you say anything stupid. I want your opinions on this one..