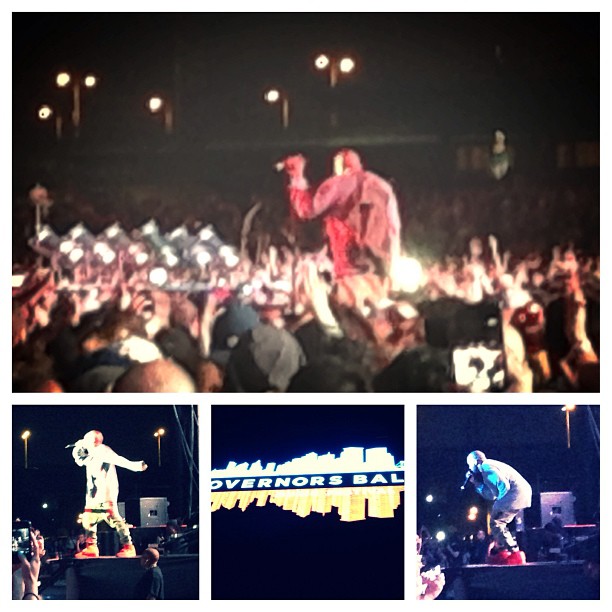 Kanye West was the headliner tonight at the Governors Ball in New York, following Kendrick and Nas‘ performances last night. The rapper who will release his new album Yeezus on June 18th, performed a 90 minutes set which included his hits like ‘Can’t Tell Me Nothing’, ‘Power’, ‘Clique’, ‘Don’t Like (Remix)’, ‘Diamonds’, ‘Runaway’ and many more.

He also took the opportunity to perform some new material, presumably from Yeezus. Apart from ‘Black Skinhead’, ‘I Am A God’ and ‘New Slaves’, he also debuted a song which is supposedly called ‘On Site’ (he has only performed it once before). Watch some good quality footage from the show after the break.

Sidebar: Millionaire Internet Entrepreneur Trent Silver has launched a crowd funding campaign to generate funds for a diamond-encrusted high chair to be gifted to Kim Kardashian and Kanye West’s baby. All additional funds raised through the campaign will be donated to Ann & Robert H. Lurie Children’s Hospital. Full details are here. Says Trent:

For as little as $5 you can have your name on the giant card. And, I will be selecting 5 donors to my crowdfunding project who will accompany me to the Kardashian house to make the delivery. You will have to get to LA, but we will meet up and you will ride with me, and the media that will surely accompany me, to deliver the goods.

I Am A God

Footage via HHNM and Normal Mag