Late last year, Big Sean announced that he will be releasing his new album I Decided on February 3rd and since then, he’s already dropped another song called ‘Moves’ and accompanying music video.

But as was expected by fans, the Detroit rapper will also be going on a supporting tour starting March 17th at the Revention Music Center in Houston, Texas. So far, 21 dates have been announced with stops at L.A., Chicago, Boston, Atlanta, Philly, New York and even a date on April 2nd in Toronto.

Part 2 of the tour is expected to be announced later. ‘Uber Everywhere’ hitmaker MadeinTYO will serve as the opening artist. Pre-sale for tickets begins Jan. 10 at 11 am ET while general sale will start on Jan. 13. Live Nation will also host a pre-sale Thursday, Jan 12 from 10 a.m. through 10 p.m. Additionally, Citi card members will have access to pre-sale tickets beginning Wednesday, Jan. 11 at 10 a.m. through Thursday, January 12 at 10 p.m. via Citi’s Private Pass Program. Find tickets here and check out the full schedule below. 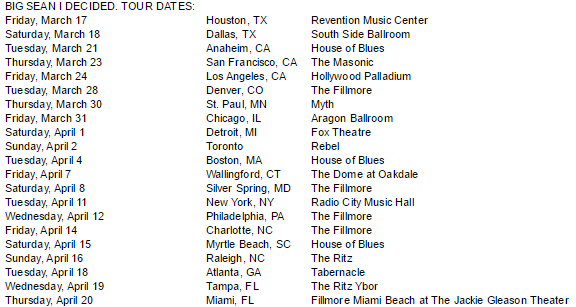